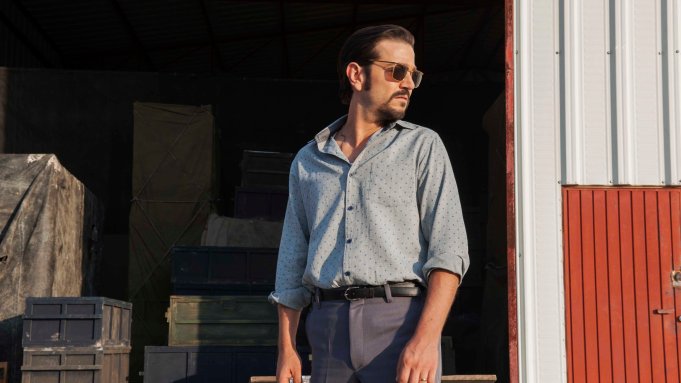 “Narcos: Mexico,” the much anticipated fourth season of Netflix’s global hit show kicks off worldwide on the streaming giant by Nov. 16.

As it moves away from its three-season Colombian setting, the new 10-episode series traces the genesis of the drug trade just south of the Rio Grande.

“Narcos: Mexico” focuses on the rise of the Guadalajara cartel in the 1980s. The key witness to this ascent is DEA agent Kiki Camarena, played by Michael Peña (“Ant-Man and the Wasp”), who moves his wife and son from Fresno, California to Guadalajara to assume a new post. Here, he goes up against the astute drug lord Felix Gallardo, played by Diego Luna (“Rogue One”), who has united a once-disorganized group of independent marijuana growers and dealers to form the infamous cartel.

Variety recently spoke to Peña and Newman who weighed in on the new season:

Peña spoke to Variety just as he was packing to leave for the Australia-set shoot of James Bobin’s live-action family adventure film, “Dora the Explorer,” where he plays the titular Dora’s father.

How did you join the cast of “Narcos?

MP: Eric Newman came to me about three years ago, and he told me there was a part for me in Season 4 to play Kiki Camarena. I remember seeing Camarena on the cover of Time Magazine so I was really excited because for me, he is a Latin hero. I didn’t hear from Eric for a while and then a year and half later, he told me they were starting it back up.

How did you prepare for this role?

First of all, it’s a real person so you can’t take many liberties. I met with Mika Camarena, his wife, and just talked to her. I wanted to see what made him tick. What made Kiki Kiki. I wanted to know what it took to have put his life in danger to catch the ‘bad guys.’ She told me that that was who he was. He had been in the military; he fought for justice so in his eyes, he was always fighting for justice. You know as an actor, you can’t overthink things so she helped me to simplify it.

Throughout your career, you’ve avoided being stereotyped, which is great, but you’ve always chosen to play Latino or insist that your characters have Latino names. Is that right?

Yes, I think it’s important that even if the character doesn’t have a Latino name, to just make him Latino, whenever possible, obviously. In the great scheme of things, I think I was inspired by people who did the same, like Edward James Olmos who was amazing in “Stand and Deliver.” There’s something cool about seeing someone on screen that kind of looks like you; I was definitely affected by it. It’s important to see Latinos that are cast as doctors, as successful people who are educated, and not just criminals. I’m not saying I haven’t played them as well, it depends on the script. But for the most part, I’d like to be a positive influence and hopefully, set a good example.

Meanwhile, Eric Newman who was in New Orleans working on another Netflix project, said:

“The plan is to spend more time in Mexico. However, it was always my intention to spend as much time and produce as many seasons of the show as possible.”

So “Narcos” could be set in other places eventually, like Spain, which is mentioned in one of the new episodes.

EN:Unfortunately, there’s a drug market everywhere in the world; they’ve reached every corner of the earth.

Was everything shot in Mexico, even the scenes that take place in Colombia?

“It was hard to leave Colombia; we grew very fond of it. But we’ve had an amazing experience in Mexico. We shot a little bit in Guadalajara, a lot in Mexico City; we were also in San Luis Potosi, Hidalgo, Puerto Vallarta, we moved around quite a bit. It’s just spectacular. Am hoping that in the same way that the first three seasons of “Narcos” showed a side of Colombia that people weren’t familiar with, season four will do the same for Mexico. People know the beaches and resorts in Mexico but I hope they get to know the incredible beauty of some of the places where we got to work; it looks like nothing else in the world.

Did the shoot go quite smoothly this time?

It was great. Obviously, we had a tragedy in the beginning when one of our location scouts was killed, which the police have called a random crime. It was not connected to the show in any way. Nonetheless, it was very upsetting and tragic. We haven’t had a problem since. Mexico is an amazing place to work. The government was incredibly accommodating and the crews are amazing. Everybody who worked on the show enjoyed it.

Was the budget for “Narcos: Mexico” similar to the first three seasons?

At the end of the day, it evened out. Some things are more expensive in Mexico and some cost more in Colombia. We somehow – miraculously-   did not increase our budget significantly.