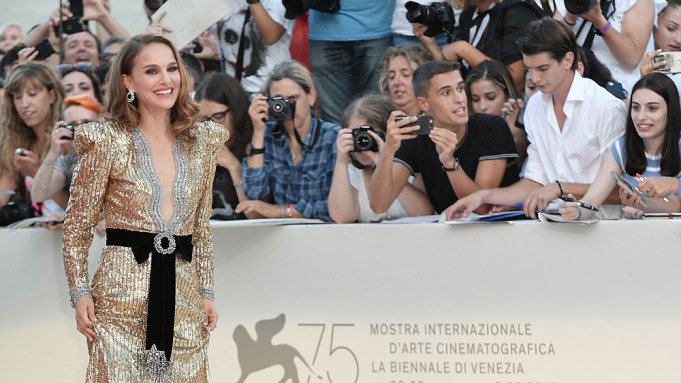 Although Brady Corbet’s much anticipated “Vox Lux” seems to have gotten a lukewarm early reaction from the press at Venice Film Festival on Tuesday, the movie has gained significant traction on the Lido, by judging from how packed the morning screenings and press conference were. Meanwhile, the performance of Natalie Portman, who stars as a dysfunctional pop star who survived a school shooting as a teenager, has been applauded on social media.

The Oscar-winning, Jerusalem-born actress, who has often been outspoken about current social and political issues, said she didn’t perceive “Vox Lux” as having a political message but instead viewed it as a “reflection of the world we live it.” “If anything, it’s a portrait of our society, and the intersection between pop culture and violence and the spectacle that we equate between these two,” said Portman.

Portman said she was “interested in the psychology of what violence does to individuals (as she is) from a place (Israel) where people have encountered it for so long.”

“Unfortunately, in the U.S. we also experience violence regularly with school shootings which are, as Brady said to me before, some kind of civil wars,” said the actress, adding that even “small acts of violence can create widespread psychological torment.”

Meanwhile, the Oscar-winning actress admitted that “playing a pop star was a dream” for her and that she had been a “fan of Sia for a long time.”

Portman then said she watched several documentaries about pop stars to prepare for the role but added, with a laugher, that she was “not inspired by a particular pop star.” Another key aspect of preparing for the part was the dancing which she nailed thanks to her husband, Benjamin Millepied, a high-profile ballet dancer and choreographer with whom she worked on “Black Swan.” “I did the dancing with my husband at home which was nice. It was very fun to work together again,” said Portman.

Corbet explained that while he approached “Vox Lux” as a drama only, he had to face all the lentghy preparations of a music movie. “There was so much preparation that went into the soundrack, choreography and lip sync. It was nearly a year’s work to put the soundtrack out a year before we started shooting,” said the actor-turned-helmer who made his feature debut with “The Childhood of a Leader” in 2015.

Besides Portman and Corbet, the presser for “Vox Lux” was attended by Stacy Martin and Raffay Cassidy. The movie is being represented in international markets by Sierra/Affinity, while Endeavor Content and CAA represent the US rights.