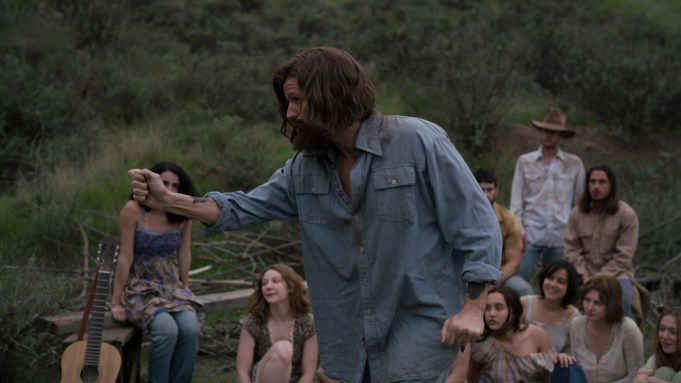 Director Mary Harron and writer Guinevere Turner have made three films together now, starting with the extraordinary 2000 adaptation of Bret Easton Ellis’s “American Psycho” that set its star, Christian Bale, on course for the A-list. After that came “The Notorious Bettie Page” (2005), a biopic of the infamous New York bondage model who burst the sexual taboos of the ’50s, and, completing this triptych, Harron and Turner arrived at the Venice Film Festival with their latest collaboration, “Charlie Says.”

Starting in the fall of 1969 and flashing backwards and forwards in time, the film tells the story of three girls – Susan Atkins, Leslie Van Houten and Patricia Krenwinkle – who became household names after participating in a series of U.S. murders supposedly masterminded by hippie cult leader Charles Manson, a two-night killing spree that left seven people dead.

The “Manson Murders” cast a long shadow over America, and there are plenty of movies about it already – indeed, they provide the backdrop to Quentin Tarantino’s latest movie “Once Upon a Time in Hollywood” – but what makes “Charlie Says” stand out a little is the fact that it deals with the aftermath of these brutal and senseless slayings.

Inspired by the work of feminist scholar Karlene Faith, who first met the three girls on death row (a sentence that was later commuted to life), the film looks at the mindset of three perfectly normal women who, through a toxic combination of brainwashing, drug abuse and physical coercion, became accessories to a crime that shocked the world.

Variety sat down with Harron and Turner in Venice to discuss the Orizzonti entry.

How did this project come about?
Turner: I was hired to write a movie about the Manson girls and my first thought was, ‘Well, that’s such well-charted territory – what’s a new perspective on this?’ There’s so much out there; everyone associated with the murders wrote a book. It’s a sea of unreliable narrators. So I was kind of struggling with how to tell a fresh story, and then I found Karlene Faith on Facebook, and I thought, ‘Oh, this is something we haven’t heard before.’ It was a new perspective, and a perfect way to humanize the girls, because she met them as we always saw them – these sort of interchangeable zombie-hippie girls. Then I wrote the script and asked Mary to read it – but as a friend, not as a director.

Harron: When I come to L.A. I usually have breakfast or lunch with Guin, and she told me about it. I thought it was a great subject for her, and a really fascinating subject, but someone else was attached to direct it at the time. So I read it, and I said, “Well, if things don’t work out, this is something I’d love to do.”

What was it that made you finally decide?
Harron: The director left, for whatever reasons directors leave.

Was the director male or female?
Harron: It was a man. I think he was much less interested in the ‘women in prison’ aspect. I said to Guin, “But that’s the movie I want to make – women in prison. Because that’s a story I don’t know.” I mean, I’ve had other Manson girls scripts cross my desk in the past. A lot of those other scripts would take Linda Kasabian [as the focus], because she was innocent. But it’s too easy to focus on the person who didn’t do the murders. What I was interested in was taking the hardest aspect of that story.

Turner: Also, as a woman filmmaker and as a writer, the toughest thing [to do] is to take the people who are actually guilty, and in prison, and try to humanize them in a way that’s neither shying away from what they did or a work of advocacy. There’s a very delicate balance about all that.

Where did you start?
Turner: I spoke with Karlene on the phone, went to visit her, and just really got to know her and talk to her, because her book is very much a work of advocacy, so there’s a lot [in the film] that’s not in that book that she told me personally. It was just really interesting. She stayed friends with those women until her death last year. But other than that, I didn’t speak with any of the actual people, because for the ones that are in prison, it’s inadvisable for them to talk to a Hollywood screenwriter. It just hurts their parole. It’s like they’re trying to capitalize on, or get celebrity from, their crimes.

How did you come to cast Matt Smith as Charles Manson?
Harron: It’s funny, I think probably the first time his name crossed my radar, I thought, ‘He’s 6ft 1 and he’s British. He’s a great actor, but…’ [Laughs] It’s funny. I ran into him at the Emmys – he was Patrick Bateman in the “American Psycho” musical – so we had a nice talk, and there was already a natural connection there. Then I heard that he was interested in meeting me for the role, so I said, “Well, come in tomorrow morning, and we’ll do it.” He came in and it was the most electrifying audition I think I’ve ever been at. It was so exciting. It was like, “There’s no one else!”

Turner: When Mary showed me the audition tape, I thought, ‘Huh? Prince Philip?’ I didn’t know Matt’s work except for “The Crown,” and then I saw the audition tape and I was like, “Ooh, he can do eyes of madness. I’m scared of him!”

Harron: One thing that Guinevere wanted to do in the script is humanize Manson, in the sense that Manson is a paradox. Obviously, he had this hold on his fold, where they thought he was Jesus and he’d convinced them he was Jesus, or a Christ figure, but he was a loser, really. He was this kind of pathetic guy who’d been in jail, who had one great talent, which was manipulating women and weaker-minded men. He used that genius to create this horrible tragedy.

How do you feel about Quentin Tarantino’s movie, which is set in the same era?
Harron: Actually, I’m excited by his movie, because I think what he’s really fascinated by is Hollywood in the ’60s. My dad was an actor, and I spent part of my childhood in Hollywood as a little girl, and I think it’s a really interesting time: old Hollywood was being replaced by new Hollywood, and, to me, that’s a great subject for Quentin. I can’t really comment, because none of us have read the script, but I love the idea of Hollywood in the ’60s as a turning point. I don’t think he’s going to delve into the psychology of the Manson followers. I don’t see a conflict. Considering it was just a bunch of scruffy hippies who did some horrible things, this story still has huge impact and relevance, and people are still poring over it. There’s plenty of room for more films on the subject.