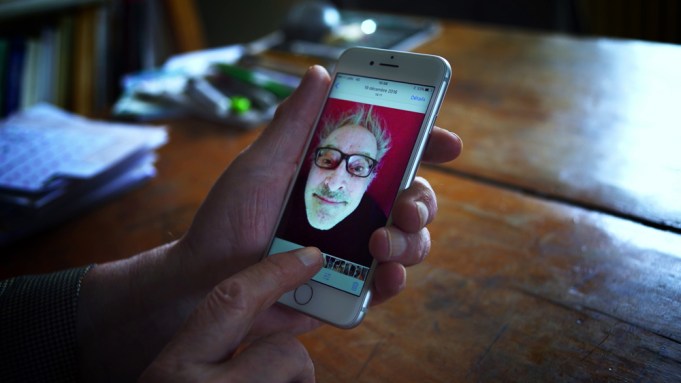 One of Central Europe’s top docu fests, known for cultivating art film and nonfiction work that explores genre boundaries, has adopted a suitably avant-garde look this year, thanks to the work of Jean-Luc Godard.

The 22nd Ji.hlava international docu fest, running Oct. 25-30 in the former silver mining town of Jihlava in the Czech Republic, is not mentioned in the moody one-minute clip posted on YouTube, although its logo appears in the last few seconds.

Instead, a disembodied hand runs a finger across a mobile phone screen menu of photographs, presumably from the life of an older man, murmuring in voiceover.

“And even if nothing turned out how we’d hoped,” he intones, “it would not have changed what we’d hoped for.”

The voice, Godard’s own, riffs on the French New Wave auteur’s habit of overlaying philosophical observations to complement his jump cuts and surreal imagery in films such as “Alphaville.”

The spot is the latest in a string of commercials made for the docu fest by the likes of Godfrey Reggio, Jan Nemec and Johann Johannsson and “comes in the format of a short film, an intimate haiku,” said Ji.hlava director Marek Hovorka. Noting the clip’s “minimalist format,” he added, “Jean-Luc Godard remained loyal to his signature method of layering meanings and references. Each new viewing opens up new interpretations.”

The images flicking by seem to cover the history of art, which “spontaneously alternates with his own memories, selfies and the perspective of a dog that gives the human position a different angle,” added Hovorka.

Godard’s latest film, “The Image Book,” won a Special Palme d’Or in Cannes this year, taking home a prize created just for the uncategorizable work by the 87-year-old director.

The Ji.hlava fest screens more than 100 films in their world, international or European premieres, with competition sections including the Opus Bonum, the First Lights section for debuts, Fascinations, focusing on contemporary experimental film, and the Eastern European competition Between the Seas, this year extended with an additional student category.

The fest is also co-founder of the pan-European festival network Doc Alliance and the VOD portal DAFilms.com.