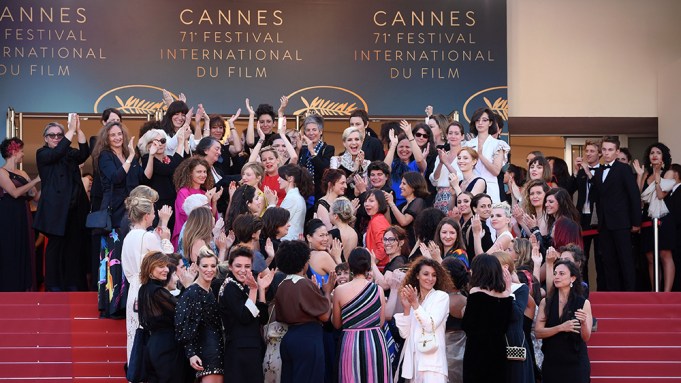 The #MeToo movement took center stage at the Cannes Film Festival on Saturday, as Cate Blanchett, Marion Cotillard, Patty Jenkins and other female filmmakers and artists gathered together to agitate for better treatment of women in the movie business.

There were 82 women in total, a reference to the number of female directors who have climbed the steps of the Palais, the festival’s central theater, since Cannes began celebrating celluloid in 1942. In the same period, 1,866 male directors ascended the same stairs, Blanchett said in a statement, as the women linked their arms in solidarity. The Oscar-winning actress and Cannes jury head was flanked by Kristen Stewart, Marion Cotillard, Ava DuVernay, Léa Seydoux, and Salma Hayek.

“Women are not a minority in the world, yet the current state of the industry says otherwise,” Blanchett said. “As women, we all face our own unique challenges, but we stand together on these stairs today as a symbol of our determination and commitment to progress. We are writers, producers, directors, actresses, cinematographers, talent agents, editors, distributors, sales agents and all involved in the cinematic arts.”

After Blanchett spoke, Agnes Varda, the legendary French film director of “Faces Places,” added, “The stairs of our industry must be accessible to all. Let’s climb.”

The specter of Harvey Weinstein, the indie film producer who helped spark an industry-wide reckoning after being accused of assaulting or harassing dozens of women, was evoked during a 20-minute gathering that was both solemn and celebratory. Announcers at the demonstration said this new awareness has come about in the wake of “Harvey Day,” calling it “a terrible event” with important consequences. After Blanchett and Varda spoke, the assembled women erupted in cheers.

Festival organizers have been criticized for failing to do more to publicly acknowledge the #MeToo and Time’s Up initiatives. They have also been faulted for not promoting more female filmmakers. Only three of the 18 films in competition this year are from female filmmakers — a low number that nevertheless represents Cannes’ best showing since 2011.

The march up the steps of the Palais was organized by a new movement called 5050×2020, which calls for more gender equality and diversity in the French film industry. It preceded a gala premiere for “Girls of the Sun,” a Kurdish female freedom-fighters drama from director Eva Husson.

“The event is underscoring the fact that there has been an awakening about the need for more gender equality,” said Didar Domheri, the producer of “Girls of the Sun.” “There is a lot of work to do in France compared with the U.S. where similar initiatives have rallied so many people and it’s smart to use the Cannes Film Festival to shine a spotlight on these issues.”

Asked about the under-representation of women filmmakers at Cannes, Domheri said more women must be encouraged to submit their films to the festival.

The red carpet demonstration wasn’t the only sign that women, despite institutional obstacles, were coming to the fore at Cannes. Saturday will also mark the premiere of “Angel Face,” a drama about a dysfunctional mother (Cotillard) from director Vanessa Filho. Earlier in the day, “355,” a spy thriller with Jessica Chastain, Lupita Nyong’o and Cotillard billed as a sort of feminist James Bond, nabbed a massive $20 million-plus deal for domestic rights from Universal Pictures. It is one of the biggest projects at this year’s festival. But it’s hardly the only female-fronted film looking for backing or distribution. Buyers are also being pitched on a women-led riff on “The Expendables” and a Salma Hayek-headed spinoff to “The Hitman’s Bodyguard.”