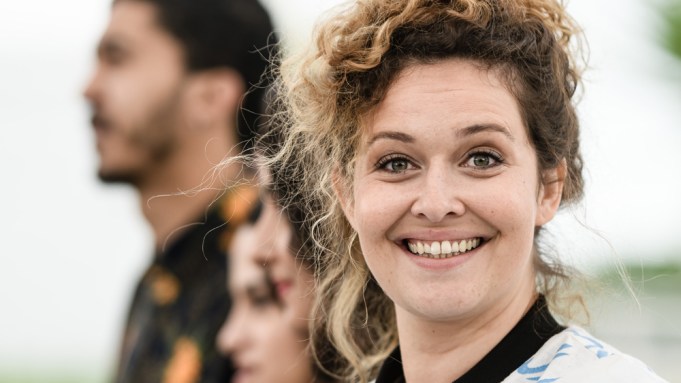 Thirty-four-year-old Meryem Benm’barek, who divides her time between Paris and Morocco, received a standing ovation after the premiere of her debut feature, “Sofia,” in Un Certain Regard in Cannes this year, and won the screenplay award.

The pic is a powerful story about a 20-year-old middle-class girl who is forced to marry the working-class father of her newborn baby, who she hardly knows, to avoid going to jail. It screened at the Marrakech Film Festival this week as part of the Morocco Panorama section.

Benm’barek had previously won the 2014 Grand Prize at the Rhode Island Intl. Film Festival for her short “Jennah” (produced at the INSAS film school in Brussels).

Benm’barek talks to Variety about how the success of “Sofia” has opened up new possibilities for her next project, which she plans to shoot in France, and the state of Moroccan cinema.

Were you surprised by the success of “Sofia”?
I trusted the movie, but I didn’t know it would go so far. When the film won the screenplay award at Cannes it was a shock for me. Making “Sofia” meant a lot of sacrifices. It was a long process and very difficult, especially as a young woman filmmaker.

Has it opened up new possibilities for you?
Yes. After the success at Cannes and the theatrical release in France and Morocco when I go to a festival I can feel the joy now. People have become very interested to know about my next project and it’s really put attention on my next script. It’s encouraged me to try to go further while remaining consistent with what I want to say. As I’ve been attending so many festivals, it’s energized my ideas and my next project is now burning inside me. I need to get it down on paper.

Can you talk about the next project?
Over the past six months, since the film premiered in Cannes, I have been travelling all the time and now I need to stop to write. Marrakech is the last major film festival of this “tour”. I have an idea and want to start writing the screenplay this week. I’m still at the beginning stage and things are still a bit fuzzy in my head.

Where will the story of your next film be based?
It will take place in France. I grew up in both countries and I live in both. I’m concerned about social problems that exist in both France and Morocco. My third film may be set in Morocco.

Do you think this has been a good year for Moroccan films at the Marrakech film festival?
I think it’s perfectly normal that a Moroccan film festival should place emphasis on local films. This year has been a good big first step. But there’s still much more to do. It continues to be very difficult for Moroccan filmmakers to make films solely with Moroccan funds. We need a more solid system. To make a movie right now our filmmakers know that it will be very complicated without a foreign coproduction or money from a fund such as the CNC’s Aide aux Cinémas du Monde. We’re not yet fully independent. The system of paying national subsidy support in tranches in Morocco is also complicated and often forces our producers to have to take out personal credit in order to complete their films.

How did you finance “Sofia”?
My case was a bit different. I didn’t have money from the Moroccan Cinema Center. It wasn’t completely their fault. We missed some of the application deadlines and I finally decided to make “Sofia” as a low-budget film to have it ready in time for Cannes. But I am in a relatively privileged position because I live in France and it’s perhaps easier for me to raise financing. I got help from the CNC and Canal Plus, which made it easier to make my film.

Living in France and having studied film in Brussels do you think this helps you see Morocco from the outside?
People from France tell me that, but it’s a bit dangerous. It can be difficult when you live far from the place you want to talk about in your films. You need to be inside the issues, otherwise your work can become ethnocentric. I don’t trust the idea of the benefits of looking at things from the outside.

What are the main obstacles for women filmmakers in Morocco?
It’s still very difficult for women filmmakers. The first thing we need to do is to put more women in key decision-making positions. We need to ensure parity in that part of the industry. Everything would become much easier. That’s the theme I also addressed in “Sofia” – that patriarchy is dangerous not just for women but also for men. That being said I don’t wake up every morning thinking about women’s issues. I see myself primarily as a human being and a filmmaker. Perhaps I’m in denial. But we all have to just do our jobs.