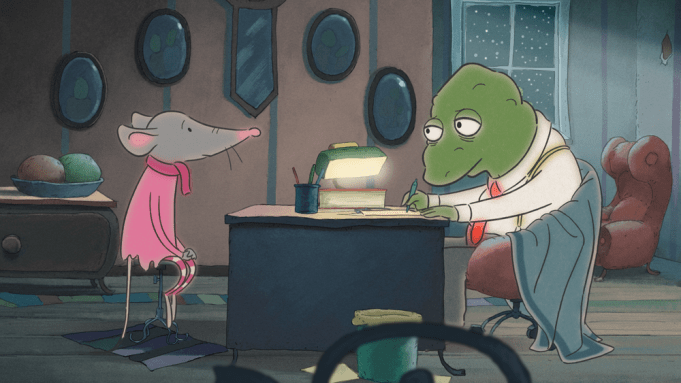 Variety has been given exclusive access to the international trailer for the kids’ animated movie “Gordon & Paddy,” which stars Stellan Skarsgard in the voice-cast. The film, which has its international premiere in the Berlin Film Festival’s Generation KPlus section, is being sold by Jan Naszewski’s New Europe Film Sales.

The voice-cast of Linda Hambäck’s film also features Melinda Kinnaman (“Modus”) and comedian Felix Herngren, who penned the script for “The 100 Year-Old Man Who Climbed Out the Window and Disappeared.”

The film tells the story of the forest’s police chief Gordon, who is about to retire and needs to find a new assistant. Paddy, a clever mouse with a great sense of smell, seems to be the right candidate. Together they have to solve Gordon’s last case – the mystery of squirrel’s missing nuts.

“Gordon & Paddy” is produced by LEE Film’s Hambäck and Lina Jonsson, and is co-produced by Film i Väst and SVT, with support from the Swedish Film Institute, Nordisk Film & TV Fond, Creative Europe, YLE and TriArt Film, which released the film across Scandinavia in December. French rights were presold to Les Film du Preau, which intends to release the film in September.

It is written by Janne Vierth based on Ulf Nilssons and Gitte Spees books about Gordon published in Sweden, Germany, U.K., Poland, China, Turkey, the Netherlands, South Korea and Russia. The film was animated by Dockhus Animation and the music was composed by Martin Landquist.

It’s the second collaboration between Naszewski and Hambäck. She used to work as a producer with Jonas Odell, whose animated short films “Tussilago,” “Never Like the First Time” and “Lies” were distributed worldwide by New Europe.

New Europe’s catalog includes another animated feature, Signe Baumane’s “Rocks in My Pockets.” These two films are the first of a planned slate of children’s animation films that the company is working on.

Naszewski said: “’Gordon & Paddy’ is a wonderful and exciting family detective story. We fell in love with the charming characters, the positive message of the film and its great visual style. It fits perfectly into New Europe’s catalog of quality animation. We are preparing a whole slate of such projects. It’s great to be working with Linda again, who gave us our first ever film in early 2010, which helped me to start the company.”

New Europe’s line-up includes Sundance-selected “Pity” by Babis Makridis, and “Loveling” by Gustavo Pizzi, Venice and Toronto-selected “Under the Tree” by Haffstein Gunnar Sigurdson, and Berlinale best debut and Generation winner “Summer 1993” by Carla Simon – the latter two were selected as their countries’ Oscar entries.