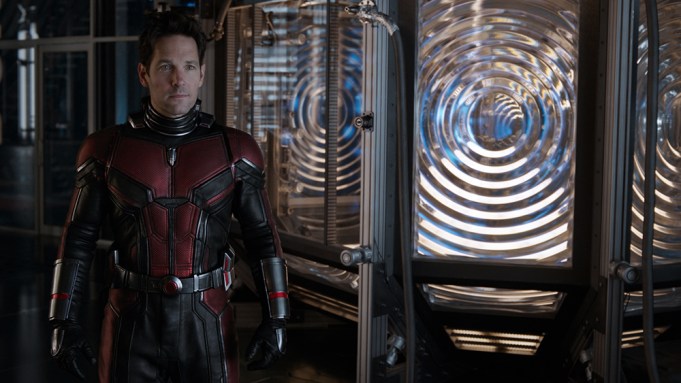 “Ant-Man and the Wasp” flew to a worldwide opening of $161 million, including $85 million internationally. In North America, the tentpole starring Paul Rudd and Evangeline Lilly earned $76 million, making it the 20th consecutive Marvel film to open No. 1 at the box office.

The sequel had the biggest debut in Korea with $20.9 million, followed by Mexico with $6.7 million, and Indonesia with $5.6 million. Other top territories were Russia ($4.9 million), Australia ($4.7 million), and Taiwan ($4.6 million). The film bows in India next week.

Another band of Spandexed protagonists are enjoying box office success. Disney-Pixar’s “Incredibles 2” picked up another $35.7 million overseas and $29 million domestically for a global weekend total of $64.7 million. In four weeks, the blockbuster has earned $772.2 million worldwide.

“Incredibles 2” opened in France with $9.9 million, marking the second highest opening for a Pixar release behind “Finding Nemo.” Top holdover markets include China ($48.7 million), Mexico ($33.8 million), Australia ($24.6 million), and Brazil ($15.4 million). The film launches next in the U.K. and Poland. Over the next few weeks, rollout continues in Korea, Japan, Spain, Italy, and Germany.

Universal and Amblin Entertainment’s “Jurassic World: Fallen Kingdom” scored $27.6 million from 86 international territories. The dinosaur blockbuster, which just crossed the $1 billion mark at the global box office, has earned $725 million from overseas alone. The sequel made $5 million this weekend in China, taking its tally there to $250 million. “Fallen Kingdom” picked up another $2.9 million in Mexico this weekend, along with $2.8 million in Australia, and $1.7 million in the U.K. and Ireland. It opens in the final key market, Japan, next weekend.

New offering “The First Purge” launched abroad with $10.9 million in 26 markets, including $2.2 million in the U.K. and Ireland, $2.1 million in France, $1.5 million in Germany, and $1.1 million in Spain. In North America, the Universal and Blumhouse collaboration bowed with $17.2 million over the three-day period, bringing its worldwide total to $42 million.

Rounding out the weekend is Sony’s “Hotel Transylvania 3: Summer Vacation,” which took in $2.2 million this weekend in Australia. Internationally, the film has made $5.7 million, and opens in North America on July 13. Fellow Sony title, “Sicario 2: Day of the Soldado” collected $800,000 from 13 markets for an international cume of $4.2 million. Domestically, the Columbia Pictures and Black Label Media sequel has pocketed $35 million.