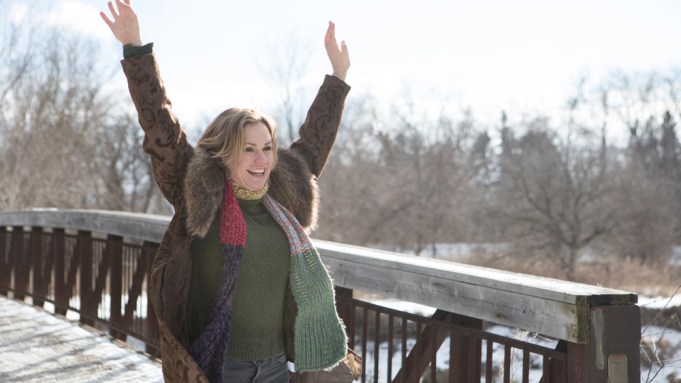 In Denis O’Hare’s script for “The Parting Glass,” which plays Sunday at the Karlovy Vary Film Festival, the actor delves into a deeply personal tragedy – the suicide of his sister in 2010. Anna Paquin, who plays his sibling in flashback, delivers an incredible range of varying visions and memories of the lost Colleen as the Missouri family members of Danny (O’Hare) try to sort through their feelings and come to terms with their collective loss. The broken husband (Rhys Ifans) joins the siblings (Melissa Leo, Cynthia Nixon and O’Hare) and the aging father (Ed Asner) on a journey to unearth painful truths.

“The Parting Glass” is O’Hare’s first filmed screenplay, and the directorial debut of Stephen Moyer, Paquin and O’Hare’s co-star on “True Blood.” O’Hare’s other acting credits include “This Is Us” and “American Horror Story,” both of which earned him Emmy nominations, and “Milk” and “Dallas Buyers Club,” both of which received Screen Actors Guild award nominations for their cast. The movie was produced by Casm Films; Concourse Media is handling world sales.

How long were you writing “Parting Glass” and what was your routine?
I started writing this screenplay in the fall of 2012, I think, and produced a first draft pretty quickly – in around three weeks. It all sort of tumbled out of my head from my memories of that day. I was shooting a horror film in Morocco and any spare time I had, I devoted to writing.

What motivated you to get this filmed and to break through as a screenwriter?
I’ve actually always been a writer. I was a poetry major for two years at Northwestern University before I panicked and decided I needed a practical degree and so I got a B.S. in Theatre (Speech). I ran a salon in Chicago in the mid-80s, and when I first moved to NYC, I spent my time between auditions writing plays and movies for myself so that I’d have a job. None of them got made but at least it gave me practice and hope.

For this story, my motivation to get it made was twofold: It was a great story and a great mediation on family and death and memory, but I also wanted to exorcise some of the toxic after-effects of my sister’s suicide and the best way for me to do that was to work through it and find a way of honoring her memory.

What was it about this story primarily that you wanted to put out there?
I think suicide is one of our last taboos. It leaves behind a fog of blame and what-ifs in a way that any other sort of death doesn’t. One is rarely at peace with a suicide and I wanted to show that. I also hope that this film might bring comfort to someone else who is dealing with the suicide of a loved one or friend. It’s a strangely timely conversation – something I couldn’t have known back in 2010 when this idea first started buzzing around in my head.

The Colleen character seems rather transcendent and mythic in your story, if tragic… What was the most difficult moment for you to re-enact about this experience and how did you get through it?
The scenes I shot with the Colleen character were all pretty fun for me. Much of my experience with my actual sister was good and, actually, fun. The hardest for me to shoot was the motel scene at the very end of the film when Danny finally lets go and lets the grief take him. I dreaded doing that scene. The day of shooting that scene was oddly tense and it was the only time I was irritable and spiky on set.

How much does the story deviate from your own life?
I would say that the story is 85-90% accurate to the events that took place back in November of 2010. I’ve left some things out because, as they say, truth is stranger than fiction and I felt the audience wouldn’t believe them. I’ve also added scenes that didn’t take place and I’ve changed the location and timing of some things.

Almost all of the stories told in the movie are true. I won’t tell you which things are fictionalized but there are a few big ones.

Writing so many scenes for multiple characters in which they’re often arguing, sometimes confused, makes for complex scenes, doesn’t it? What was your thinking on structuring them this way?
I like to capture the real way people speak and that includes interruptions and deviations. People don’t always finish thoughts or they start out with one motivation and then lose their way. I often eavesdrop on people’s conversations and marvel at the construction. I tried to capture that in my writing.

Setting the story in a caravan of vehicles moving through wintry Missouri creates production challenges; why was it important to film it this way?
Cars always pose problems. Driving them is a problem, background continuity is a problem and fitting a camera inside is challenging. I was attracted to the sense of dislocation that my family went through – the fact that we were “homeless” and wandering and the cars made that possible. The cars also allowed me to vary the groupings of the characters and to create the possibility for intimate scenes – like Karl and Danny or Tommy and Danny.

You’ve assembled an all-star cast – how did you manage that for your first filmed script?
I talked to a lot of people about doing this film. Some people said no because they didn’t want to take on the material – they didn’t want to go there. Other folks had to back out because of conflicts. In the end, I can’t imagine a better cast and I’m so grateful to all of them for giving so generously.

How did it come about that Stephen Moyer, your costar in “True Blood,” would make his directing debut with this story and that your other costar, Anna Paquin, would produce?
Stephen also had a production company that made it possible to make this movie – I couldn’t have done it on my own – I didn’t have the kind of infrastructure they had.

What are some of the other scripts you’ve written and why do you think this one was the first to make it to screen?
I’ve co-written two plays with Lisa Peterson: “An Iliad” and “The Good Book.” And I’ve written at least two other movie scripts – one which I tried very hard to get made and am still trying to land somewhere.

I’m also currently developing a TV series with my husband and we are going out to pitch in L.A. at the end of July. It’s a brilliant idea and I’ve written the pilot around five times and am pretty happy with where we are. I think “The Parting Glass” got made because Anna, Steve, Cerise Hallam Larkin and Mark Larkin (of CASM Films) all responded to it. I also had a burning desire to get it made because of my sister. I don’t think I would ever have felt right knowing that I didn’t make it.