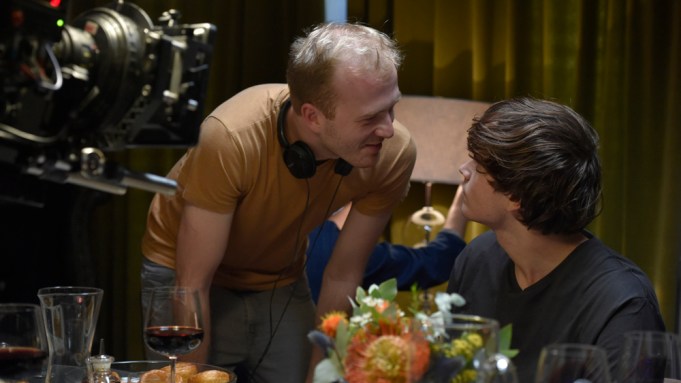 A week before the world premiere of his debut feature film, “Lucid,” at the Edinburgh Intl. Film Festival, young British filmmaker Adam Morse has revealed in public for the first time that he is registered as a blind person. Even one of the film’s lead actors, Billy Zane, didn’t know until the shoot was underway, and one of the film’s principal investors only found out after its initial test screening in Hollywood.

The film, which is nominated for Edinburgh’s prestigious Michael Powell Award in the Best of British category, follows a lonely young introvert, played by Laurie Calvert, who has a crush on a dancer, but can’t pluck up the courage to talk to her. His eccentric neighbor, played by Zane, offers to help him by using an experimental form of therapy called lucid dreaming. This helps the boy to be more daring, but the romantic quest leads him into dangerous waters.

28-year-old Morse, who had previously made a short film “The Window” in 2014, started losing his sight nine years ago due to a rare mitochondrial disease, which has left him with only partial peripheral vision. He refuses to use a cane or have a guide dog.

Writing, prepping and shooting the film all presented challenges, but Morse was determined not to let his disability hold him back. “Every day was a challenge, and is now, [but] I didn’t think of it as being a challenge. I just thought: what can I do, not what can’t I do,” he tells Variety.

He used a screen reader to write the script and memorized the layout of the sets and locations to avoid tripping. Morse’s core team and some of the actors knew of his sight impairment, and would warn him of any hazards. He used a 60-inch monitor to follow the action, relying on cinematographer Michel Dierickx to be his eyes on set. “When it came to creating a shot, it was all in my mind’s eye anyway, and I have enough sight that I can still see the world, but just in my own way. When the feed from the camera goes into my monitor, yes, I have to get extremely close to be able to compose a frame.”

Many of the crew didn’t know he was legally blind. Morse says the camera assistants whose job it was to move the monitor around the set must have thought he was “an egotistical young filmmaker who wanted this giant screen to see his work on.”

Most of the actors knew about his condition before the shoot, but not all — including Zane. “Billy didn’t know, and I only told him two days after we started filming. He didn’t believe me, so I had to show him my blind card [Certificate of Vision Impairment],” he says. “He was shocked, but after that our relationship on set grew stronger. He asked me about what I had gone through to get to that point, and so he respected me more — as an artist and a man.”

Another, perhaps more pressing issue was that he hadn’t told one of the principal financial backers that he had put his money into a film directed by a man registered as blind. Was Morse nervous? “Big time. I was dead all over again. The anxious kid in the movie? That was me. I was having panic attacks like I’d never felt before. I just felt all the weight — all the responsibility — of having to deliver. I never stopped believing I could deliver, but it felt like someone was looking over my shoulder,” he says. “I just knew I had to keep it private because if the investor found out that he was trusting all this money to a registered blind man then it would have put the whole project at risk.”

He adds: “I felt a responsibility, not just to the story I was telling, but to the people telling it with me — my team. I didn’t want [the investor] to find out and then pull the plug on us. I had that anxiety of being found out every time I went to a meeting him. I would bump into something or he would point to something across the room or on the screen of his phone and I would have to fake it — pretend that I knew what everyone was looking at… He was none the wiser about my condition thankfully.”

The investor only learned the truth after the initial test screening in Hollywood. “It was actually a beautiful moment when he found out,” Morse says. “We did a test screening in Hollywood during post-production. It was the first time he had seen a cut of the film, and I told him about my condition afterwards during dinner. He was already buzzing and really proud of what we had put on screen.” Morse believes that the investor wouldn’t have backed the film if he had known before. “And you know what? I don’t judge [him] whatsoever for that decision. If the shoe was on the other foot I would do the same.”

Despite all the high anxiety, it was worth it, he says. “If I can help other people to have confidence in themselves and believe in their dreams then it is worth it. I just want to inspire those who lack faith in the universe, spread a positive message and lead by example.”