The Yes Men’s Mike Bonanno on the Power of Pranks 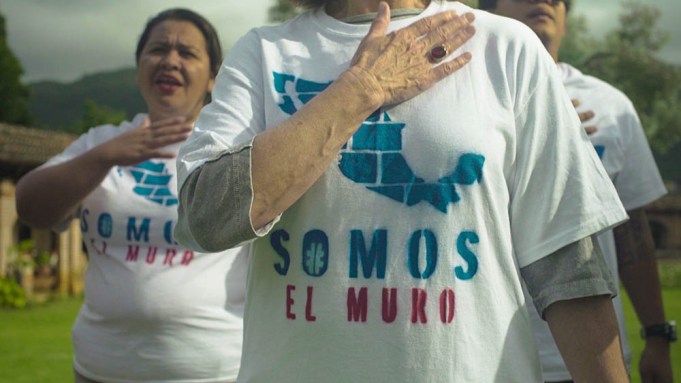 Courtesy of Ji.hlava International Documentary Film Festival
Comedians and satirists have been thoroughly challenged in the age of Trump, says Mike Bonanno of the Yes Men, the prankster duo who have sent up corporate greed and government injustice since the 90s by impersonating members of elite power structures.
“The challenge is how to work with humor in this moment,” he told a packed audience at the Ji.hlava docu fest, admitting he already finds footage from the Yes Men’s new trailer, put together in June, “kind of horrifying.”
In the clip, for an as-yet-unnamed film in which he and partner Andy Bichlbaum ironically explore how to build the greatest wall ever, they are seen carefully studying the strengths and weaknesses of the former Berlin Wall, Israel’s “Security Fence” and the Great Wall of China.
One sequence shows them making enthusiastic notes about razor wire, then attending a helpful demonstration by a contractor who demonstrates how it can neatly slice up an uncooked chicken.
The Yes Men’s approach, honed over more than a decade since they impersonated Union Carbide executives who announced to the BBC that they would pay full reparations for the 1984 chemical spill in Bhopal that cost at least 3,787 lives, involves a kind of uber street theater.
The technique is really nothing new, Bonanno explains, citing medieval pageants and ancient spectacle, pointing out every human society has had valued people in the role of tricksters and clowns.
This, combined with the construction of an iconic image, such as the outfits suffragettes wore when campaigning for women’s right to vote in the early 20th century, is key to giving a message impact.
In the case of a sendup of the NRA two years ago at the Reagan Presidential Library, Bichlbaum made his appearance as the character of Hensley Cocker, a Second Amendment booster proudly announcing a Share the Safety program. He told fans of the NRA-loving President that the organization had decided to launch a buy one-give one campaign in which they would donate guns to inner-city minorities who would have trouble getting them otherwise.
Wearing a ZZ Top-style beard and ball cap, Bichlbaum’s character finds himself quickly on the run from security as he and Bonanno escape the Reagan library’s premises.
In the two years since that stunt, Bonanno confesses, it has become far more challenging to send up authority figures. The Obama administration, he explains, could be shamed because they were sincerely trying to do good. The current White House, by contrast, would simply enjoy being ridiculed by the Yes Men.
It’s a dilemma for even “shameless polemical political filmmakers,” he says.
One grain of hope is that the parodies the team launch, whether promoting the wearable Survivaball as an answer to climate change or the recycling of human waste for fast food, is that the reach of these campaigns is often broader than they expect; Bonanno was touched to find members of the Occupy Wall Street movement who knew the Yes Men’s work well, he says.
Another bright ray is the insistence on bringing out decency even in quarters where no one expects it, Bonanno explains, as in when the team managed to get high-level defense contractors at the Homeland Security Congress in 2014 to join a clean energy dance led by Native Americans. They managed the coup by announcing a fake Department of Energy plan to build vast wind power plants and give ownership to indigenous nations, then had partner Gitz Crazyboy lead the chanting.
Focusing on one clear idea is also powerful, Bonanno says, which will be key for their new film. “It’s very simple – we’re just talking about walls. Because of that simplicity, it has a universality.”
Whatever the final formula will be, the Yes Men aren’t going away any time soon, says Bonanno, who notes the project has already secured ARTE funding in exploring “how we overcome the fear that’s driving these walls.”
Then he notes, “We don’t have any Mexican funding yet – If you’re from Mexico, please talk to us.”