John Butler's engaging dramedy pivots on the improbable friendship between an Anglo TV weatherman and a Mexican day laborer in L.A. 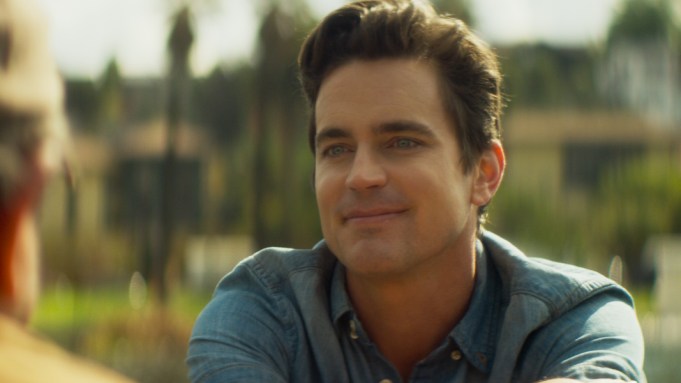 In “Papi Chulo,” a scrupulously low-key and unassumingly ingratiating dramedy about the friendship forged between a thirtysomething Anglo TV weatherman and a middle-aged Mexican migrant day laborer, Irish-born writer-director John Butler (“The Stag,” “Handsome Devil”) turns an outsider’s eye to the dynamics of interrelationships that cross socioeconomic divides in L.A., and makes it clear, without hammering home his point too insistently, that one can intelligently and entertainingly illuminate universal verities about basic human needs by focusing on specific details of place, class, and sexual orientation.

Sean, played with an admirable fearlessness by Matt Bomer, is the weatherman, a usually chipper professional who has an on-camera meltdown — something more than a crying jag, but not quite a cry of anguish — while forecasting another day of hellish heat in and around L.A. Ordered to take a sabbatical by a news director (Wendi McLendon-Covey, milking a brief, thinly written role for all it’s worth) who’s worried about tarnishing the station’s “brand,” Sean finds himself with too much time on his hands in the home he used to share with his departed lover (whose departure, of course, is the cause of his frazzled mental state).

Eager to paint over the spot on his deck where he and his gone-away companion once positioned a potted tree, Sean hires more or less at random Ernesto (Alejandro Patiño), one of the men seeking work, any work, outside a hardware store. Sean speaks little Spanish, and Ernesto speaks only slightly more English, but they communicate efficiently enough for Ernesto to at least begin the painting job.

And then things get a tad more complicated.

Right from the start, Sean tries — maybe too insistently, maybe even presumptuously, but he tries — to make Ernesto feel at ease and respected by treating him as an equal. By the second day Ernesto is on Sean’s daily payroll, however, the weatherman is bringing the day laborer on excursions away from the work site — hiking in the hills here, row-boating on a lake there — mostly so Sean has someone to talk to. (Never mind that Ernesto understands only bits and pieces of what he says.)

Fairly early on, Ernesto recognizes that Sean is gay. This isn’t off-putting for Ernesto, who is hardly your standard-issue homophobe, but it’s slightly unsettling, especially when Linda (Elena Campbell-Martinez), his wife, only half-jokingly observes that her husband might be playing the Julia Roberts role in a “Pretty Woman” scenario. (It should be noted that “Papi Chulo” could be translated as slang for a pimp.) For his part, Sean bristles when another character makes another movie-inspired comparison (to “Driving Miss Daisy”) after observing his day on the lake with Ernesto. In his mind, he’s treating Ernesto with uncondescending dignity — as, though he’s not quite yet willing to use the word, a friend. But, again, things can get complicated. And signals can be misconstrued.

Butler animates “Papi Chulo” with such a generosity of spirit that, except for a few other day laborers who express their machismo with snark, only one fleetingly glimpsed minor character comes across as irredeemably unpleasant. And, to be fair, that unpleasantness is necessary to trigger a key scene in which Bomer conveys such naked vulnerability as Sean that it’s easy to accept how readily Ernesto and Linda both might think better about the poor guy.

“Papi Chulo” is the kind of movie that seems even better in retrospect because, when you replay it in your mind, you better realize the many ways it could have turned silly or simplistic, and appreciate how nimbly it avoided the pitfalls. Even while you’re watching it, you can be impressed by scenes that bring out the best in both Bomer and Patiño. At one point, as the two men are more than a little drunk and being driven to their respective homes after a party, Sean and Ernesto start singing and swaying to Madonna’s “Borderline.” There is a moment when this stops being a scene, and just is. And in that moment, “Papi Chulo” sneaks up on you and seals the deal: It’s not going where you might expect, or even want, it to go, but you will believe it when it gets there.