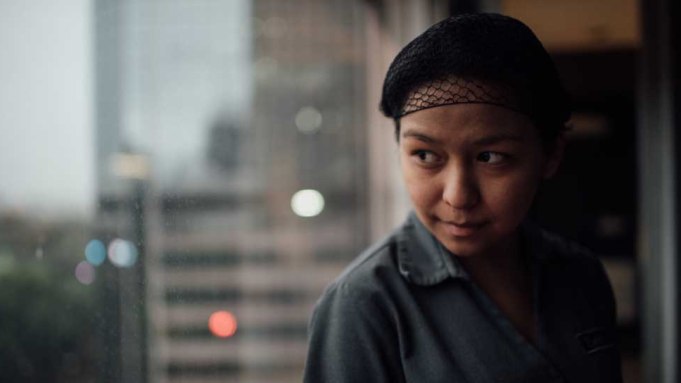 “The Good Girls,” from Alejandra Marquez Abella (“Semana Santa”), selected for Toronto Platform, has just been picked up by Luxbox.

Now Lila Avilés’ “The Chambermaid” (“La camarista”), one of the most-awaited of Mexico’s feature film debuts, made the Toronto Discovery cut, announced Tuesday, after already being selected for the New Directors’ competition at later-September’s San Sebastian Festival in Spain. Variety has had exclusive access to its first trailer and poster, dropped by sales agent Alpha Violet, which suggests the film’s tenor and charm.

The film’s near-documentary attention to detail mixes however with a humanistic vision – which Los Cabos and Ventana Sur audiences found touching – of the search for identity of a young woman who seems invisible to some clients, is already a mother, but not yet her own person.

Avilés found the key into the film befriending chambermaids at the Hotel Presidente and, following them about their work. “By understanding their humanity, I was able to discover my own point of view as an artist,” Avilés says.

At one disarming point in the film, Eve lets drop that she has to travel nearly two hours just to get to work.

Enrolling in the hotel’s adult education program, befriending a co-worker, wondering at the capricious hotel guests’ belongings, tentatively exploring her sexual attraction, putting in punishingly long hours – she has to take showers just to stay awake, hard-working Eve dreams of promotion at the hotel. She has no contact in the hotel hierarchy, but her determination to better her lot, and sense of self, grows.

“While I was filming, I couldn’t stop thinking about the working class, all that great labor force. Mexico is not only about violence and drug trafficking, there are also a lot of people who work non-stop to have a better way of life for them and their families,” Avilés observes in a director’s statement.

Though it is never on the nose, “The Chambermaid” builds as a compassionate tribute to Mexico’s anonymous laboring classes.

Actress Gabriela Cartol (“I Dream in Another Language”) plays Eve in a performance likely to catch attention as the film travels the festival circuit.

Written by Avilés and Juan Carlos Márquez, “The Chambermaid” hits Toronto and San Sebastián with notable industry pedigree, having scored prizes and industry deals throughout its post-production. First seen in Mexico at November’s Los Cabos Festival’s Gabriel Figueroa Work in Progress competition, where it scooped a Labo Award, “The Chambermaid” was the first film to see investment from a new fund set up by Shalson’s Bad Boy Billy and Brunet and Diaz-Juh, who boarded as co-producers. “The Chambermaid” was among the biggest winners at December’s Ventana Sur Primer Corte pix-in-post showcase. Paris-based Alpha Violet swooped on the title, acquiring international sales rights, soon afterwards.