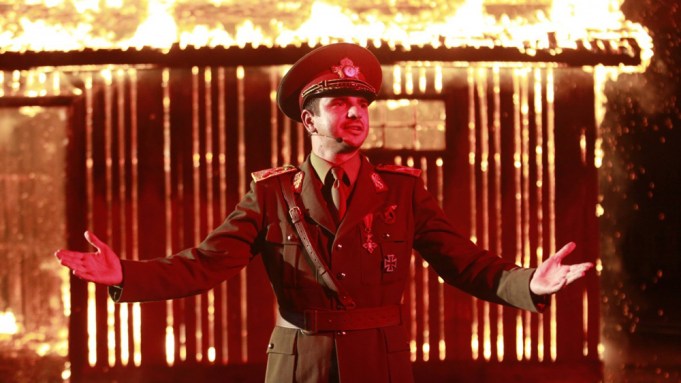 Personal stories and quests for truth dominated the Karlovy Vary film fest this year with Romanian Radu Jude taking the Crystal Globe and $25,000 for best film with his story of a director who refuses to compromise with Holocaust deniers, “’I Do Not Care If We Go Down in History as Barbarians.’”

The film, which also won the Europa Cinemas network prize and support, employs a meta-structure historical immersion to convey a little-known chapter of WWII in which popular general Ion Antonescu led a massacre of Jews. Jury member Mark Cousins said Jude’s film “points a finger at those people who are rewriting history.”

Producer Ada Solomon, in accepting the award with Jude, dedicated it “to every true patriot who dares to speak the truth about their country.” She cited parallels in the fight for the truth about Romania’s role in Holocaust with the honesty of Ukrainian filmmaker Oleg Sentsov, who has been imprisoned in Russia since 2014 on trumped up charges and is now on a hunger strike, voicing hope he “will be a filmmaker, not a martyr.”

Czech actor Jaromir Hanzlik, 70, was also feted with the president’s award for artistic contribution to Czech cinema for his career in character roles, comedies and fantasies.

Mercedes Moran (“Sueno Florianopolis”) took the actress prize for her performance as conflicted wife and mother Lucrecia while Israel’s Moshe Folkenflik won the actor award for “Redemption,” Josef Madmony and Boaz Yacov’s story of a man struggling to balance his orthodox faith and the need to play rock’n’roll, which also won the ecumenical prize.

The fest’s East of the West Crystal Globe for best film from the former East bloc, the Adriatic and Middle East went to Elizaveta Stishova’s Kyrgyz-set entry “Suleiman Mountain,” about a hardscrabble family’s struggles to reunite.

“Putin’s Witnesses,” an insider account of the rise of Russia’s strongman leader by Vitaly Mansky, won the documentary prize while the special docu jury prize went to “Walden,” a 360-degree survey of nature by Daniel Zimmermann.

Barry Levinson’s “Rain Man” took the Karlovy Vary fest audience award, capping days of talks by the iconic ’80s and ’90s writer-director, which offered insights into his battles to get what Levinson called “human stories” made in Hollywood.