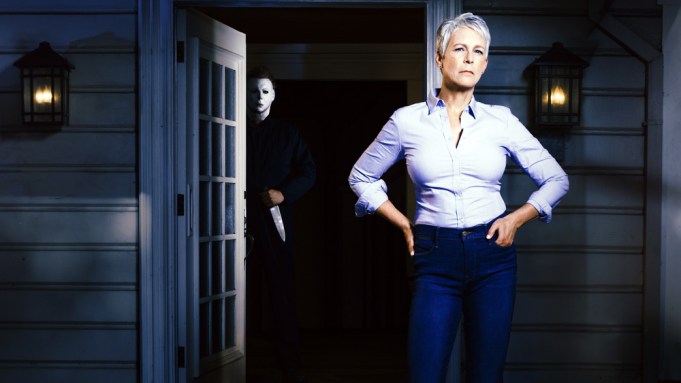 Jamie Lee Curtis’ “Halloween” has been selected as the opening night film of the 14th edition of Fantastic Fest on Sept. 20 at the Alamo Drafthouse South Lamar in Austin, Tex.

Curtis is expected to be attendance for the U.S. premiere along with producers Malek Akkad, Jason Blum and Bill Block. She is returning to play the iconic Laurie Strode in the “Halloween” franchise. “Halloween” will premiere at the Toronto International Film Festival. Universal Pictures will open the film on Oct. 19.

Curtis’ character will have a final confrontation with Michael Myers, the masked figure who has haunted her since she narrowly escaped his killing spree on Halloween night four decades ago. David Gordon Green is directing from a script he co-wrote with Danny McBride.

Fantastic Fest made the announcement Wednesday as part of unveiling its second wave of programming. It also announced that it will hold the U.S. premiere of Fantastic Fest alum Jeremy Saulnier’s psychological thriller “Hold the Dark,” starring  Jeffrey Wright, Alexander Skarsgård and Riley Keough.

Festival Creative Director Evrim Ersoy said, “2018 is proving to be a remarkable year for genre cinema. It is a constant delight to be able to discover both seasoned directors and newcomers pushing the boundaries of what genre can mean, using cinematic language to bring incisive, intelligent commentary on the current state of the world and still find enough ingenious methods to terrify, thrill and twist! This second wave represents the best genre filmmaking talent on the planet, and it is all crashing into Austin next month!”

Other titles unveiled include the world premiere of “The Boat,” a tale of man vs sea vessel; “Girls with Balls,” in which a female French volleyball team takes on an entire countryside of maniacs; the North American premiere of Timo Tjahjanto’s “May the Devil Take You,” in which Satanic rites intermingle with family in-fighting; the world premiere of French serial killer movie “Savage” and the U.S. premiere of Venice Critics week opener “Tumbbad.”

The festival will also screen “Border,” winner of this year’s Un Certain Regard at Cannes Film Festival, in an open-air showing and Spanish-language genre titles “Feral,” “The Angels” and “The Bastards’ Fig Tree.” Fantastic Fest has also scheduled Jason Trost’s “FP2: Beats of Rage,” Peter Strickland’s “In Fabric” and Gaspar Noé’s “Climax.”

The lineup also includes three titles from first-time directors — Simon Jaquemet’s “The Innocent,” in which a devout woman discovers her whole life may be a lie; French filmmaker Yann Gonzales’ “Knife + Heart,” centered on love lost and obsession, set in 1970’s Paris; and Henry Dunham’s U.S. premiere of The Standoff at Sparrow Creek.”