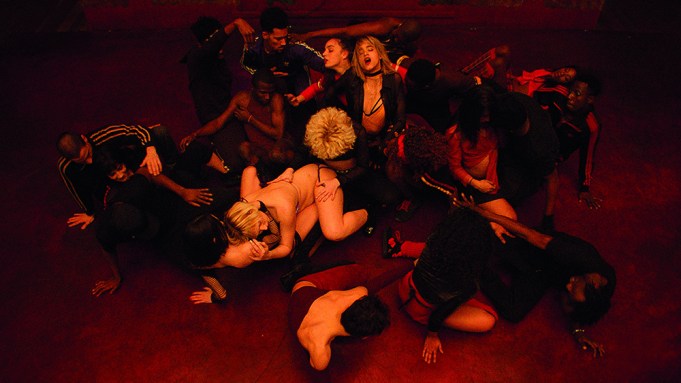 Granted by France’s Society of Dramatic Authors and Composers, the SACD Award for best French-language film went to Pierre Salvadori’s screwball crime romcom “The Trouble with You.”

Prices are given by the section’s sponsors. Notably, all three are directed by men but turn principally on women. Two prizes went to potentially crowd-pleasing comedies.

“Climax” marks the French-Argentine Gaspar Noé’s return to his grand theme – the imperatives, joy and hell of physical experience.

Sold and co-produced by Wild Bunch, its first 45 minutes delivered what appears to be among the most critically-praised of cinema on this year’s Croisette as they capture a mesmerizing dance troupe rehearsal, club music performance as never seen before,

Noé’s movie then chronicles the troupe members inadvertently drinking LSD-spiked sangria, then descent into writhing physical and mental hell in a second half which received a mixed critical reception. The Art Cinema Award is granted by the International Confederation of Art Cinemas (CICAE).

Sold by The Match Factory, and still to be reviewed by most media, “Lucia’s Grace” was praised by Waintrop himself as a “truly deranged comedy.”The Europa Cinemas Label winner stars director-actress Alba Rohrwacher as a single-mother surveyor who encounters a feminist Madonna, standing by some TV sets in an electronics store. Admirably practical, the Madonna coaches her on taking control of her life.

The Europa Cinema Label consists in promotion by Europa Cinema, as well as incentives for cinema theaters to prolong the film’s run at theaters. “This a fresh and original film from Gianni Zanasi about accepting yourself and others – dramatic, amusing and entertaining with a twist of mystery,” said a jury of four European exhibitors, adjudicating the award.

From upscale comedy specialist Pierre Salvadori, “The Trouble with You” stars Adele Haenel, the female lead of “Love at First Fight,” which swept Directors’ Fortnight in 2014. Heanel has reaped critical plaudits for her performance as a daffy Riviera detective plunging into romantic entanglement as she digs up the dirt on a local corruption, involving her late husband, a supposedly heroic cop.

“The Trouble With You” “made me think of George Cukor’s screwball classics,” said Waintrop. MK2 represents world sales rights.

Eschewing, for the most part, more rarefied arthouse, though including “one to two films” a year which were “innovative or had new ways of showing things on the screen,” Waintrop, turned Directors’ Fortnight into a major attraction at the Cannes Festival.

Of the 19 Directors’ Fortnight features with multiple reviews in this year, all received generally positive critical write-ups, some very good to raves. Under Waintrop, Directors’ Fortnight has unveiled some of the most talked-about of titles in any Cannes section, whether Houda Benyamina’s “Divines” in 2016, Sean Baker’s “Florida Project” last year, or this year’s opener and critical favorite, Ciro Guerra’s “Birds of a Passage,” a desert mobster saga which delivers a premonitory take on how the drug trade consolidated in and ended up destroying Colombia.

Multiple titles in Directors Fortnight have also reported foreign territory sales – a sign of their perceived audience appeal, something Waintrop has always held close to his heart.

“The Trouble With You,” (Pierre Salvadori, France)