Amandla Stenberg Was Shooting ‘Where Hands Touch’ on Election Day: ‘It Felt Timely’ 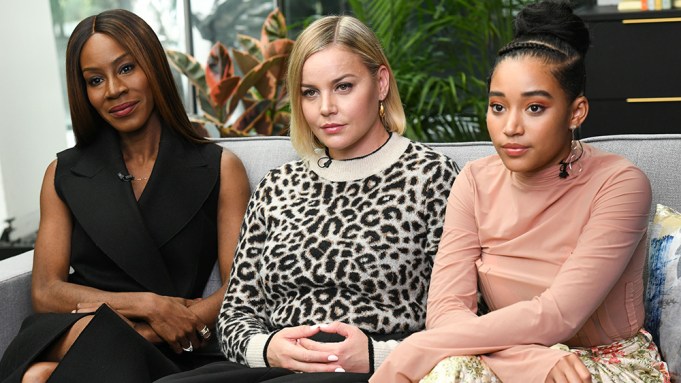 Filmmaker Amma Asante and actors Abbie Cornish and Amandla Stenberg dropped by the Variety Studio presented by AT&T at the Toronto Film Festival to talk about their new movie, “Where Hands Touch.”

The film tells the story of Leyna (Stenberg), a young girl coming of age in World War II Germany. Cornish plays her mother, desperate to protect her from the world, and George MacKay also stars as a Hitler Youth who finds himself drawn to her.

Though set more than 50 years ago, the movie resonates with timely themes, and Stenberg detailed one day of shooting that was particularly unnerving. In the scene, Leyna and her mother are stopped by an SS officer who berates them, saying, “how Leyna is a blemish to the nation, how she should be ashamed of herself for having created a Negro child.”

As it turned out, they were filming at the same time as the 2016 presidential election was taking place. “In the midst of filming this scene, we were waiting on the result of the election. We didn’t know yet who was going to be president,” reveals Stenberg. “It felt timely…the fact that there even was a candidate like Donald Trump.”

She continued, “And then when we were in between scenes on a little bit of a break, this one actor who was dressed in an SS soldier’s uniform took out his phone and he checked the news and he saw who had been elected and he said, ‘Oh. Trump is president.’ The eeriness of knowing what that would mean, anticipating it even then, and seeing those words come out of his mouth while he was wearing that uniform and we were filming that scene…it was terrifying.”

Asante added, “I think what we understood really clearly in that moment is how language can be used to make the abnormal normal. And how the issues and the atrocities and the horrors that led to the Holocaust began with a use of language.”