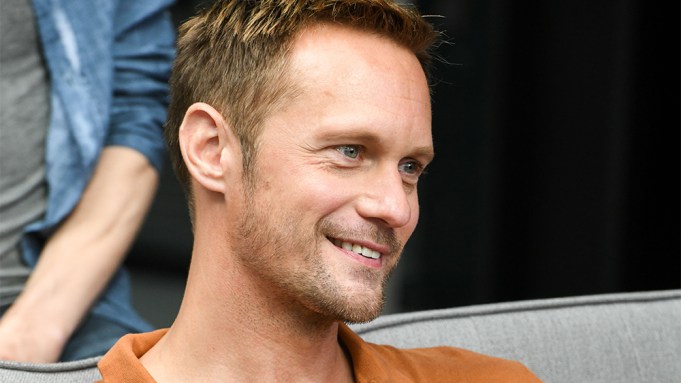 Alexander Skarsgard dropped by the Variety Studio presented by AT&T at TIFF to talk about his new film, “The Hummingbird Project.”

In the movie, written and directed by Kim Nguyen, Skarsgard and Jesse Eisenberg play cousins who attempt to build their own fiber-optic cable to gain a jump on the New York Stock Exchange. The “Big Little Lies” star shaved his head for the role after Nguyen showed him a photo of a programmer “who had an oversized cardigan and didn’t have hair on top” and Skarsgard wanted to emulate the look.

Understandably, some of the finance people weren’t overjoyed by the idea of the sex symbol playing down his looks. Admits Skarsgard, “It was a bit of a struggle to get there. I really wanted it. I could tell Kim liked the idea but there were other people involved, money people, who were a bit slightly concerned about it. They said, ‘What about a slightly receding hairline?’ I said, ‘No, I think he should be bald.’”

Added Nguyen, “People were like, ‘Don’t do this to Alex!’”

But Skarsgard said, “I loved it. And when you read a script and you see the character, unless that contradicts the director’s vision, I try to stay as true to that as possible.”

Still, the look posed problems. “On days off, I had a little stubble up here and the hairline was super straight,” Skarsgard noted. “It didn’t look like I was naturally bald, it looked like I had lost my mind and shaved it off. So people treated me slightly differently. People were a bit uncomfortable around me.”

Co-star Salma Hayek added it wasn’t just the hair (or lack of) that played down Skarsgard’s looks. “We had a scene where we were in a Jacuzzi and it was so limiting, they kept saying, ‘No, only the head could be out.’ I was like, ‘But why?’” she recalled. “And for the first time I hear, ‘Because his body is too good. We have to hide the body of Alexander because it’s too good!’”

Skarsgard also confirmed he’ll be appearing in season 2 of “Big Little Lies,” the HBO sensation that landed him his first Emmy Award for supporting actor in a miniseries. Though his character Perry, the abusive husband of Nicole Kidman’s Celeste, was killed at the end of season 1, Skarsgard will be returning in some capacity. And none other than Meryl Streep will be joining the cast as Perry’s mother.

“I tried to guide her,” Skarsgard joked about Streep coming to set. “She was very nervous, I held her hand and said, ‘You’re amongst friends, everyone is very nice here.’ It’s always tough to be new on a job. But I felt I mentored Meryl through that experience and she did a really good job. I’m proud of her. I’m not going to take all the credit for her performance in ‘Big Little Lies’ this season but…a little bit.”