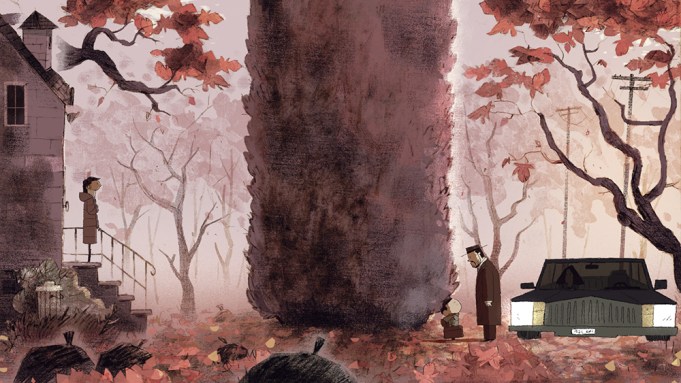 Most films are personal for the filmmakers in some way, but Trevor Jimenez’s animated short, “Weekends,” is more personal than most. It follows a 6-year-old boy shuttling between his divorced parents’ homes in Toronto and it’s steeped in his own childhood experiences.

“I grew up with divorced parents and I drew a lot about those experiences. The film started as a drawing I did 10 years ago for an animation portfolio of a kid walking from his mom’s house to his dad’s apartment,” explains Jimenez, who works as a story artist at Pixar. “I put that online and got more response on that than anything else on the vlog. People were talking about their divorced families in the comments section and I started sharing memories with my friends, and they’d be amused by them. It made me think that there was something there that could connect emotionally and also be kind of quirky and entertain.”

Just how much Jimenez drew upon his own experience is apparent in a new featurette (above) about the making of “Weekends,” which mixes scenes from the film with childhood photos.

The story offers both sweet and silly moments with the boy and each of his parents, as well as some surreal and dreamlike scenes that capture a child’s point of view.

“It’s kind of romantic in a way,” Jimenez says. “It’s a window where the parents aren’t working Monday through Friday, so you get their free, full time on the weekend. And the dad’s very focused on the kid because he doesn’t get to see the kid often. There’s something really fun and exciting about those weekends.”

An important anchor for the short is the Dire Straits song “Money for Nothing,” which Jimenez associated with his own weekends with his dad, while also establishing the ’80s time period.

“One of my strongest memories was being in my dad’s car and listening to the Dire Straits album ‘Brothers in Arms.’ He’d play ‘Money for Nothing’ all the time,” Jimenez recalls. “The guitar riff juxtaposed with the city skyline gave me a strong feeling.”

Jimenez almost didn’t get the rights to use the song. “I tried cutting that sequence to different music in the ’80s that might be more attainable, but nothing felt the same. Then we hire a music lawyer based in the Bay Area that was able to get us a quote. That’s how we were able to secure the rights.”

How do his parents feel about the film? “My mom’s pretty supportive of it,” Jimenez says. “She seen everything from it, from the first drawing to the final and I think she’s really proud of it. It’s been a good thing over all for our relationship. And it’s created more understanding on both sides — understanding her side and understanding his side.” But his father’s reaction has been harder to read. “He’s seen it, but you don’t get much from him in terms of whether it impacted him emotionally or not.”

Jimenez and his production designer Chris Sasaki will present the film at the CTN Animation Expo in Burbank on Saturday, Nov. 17.