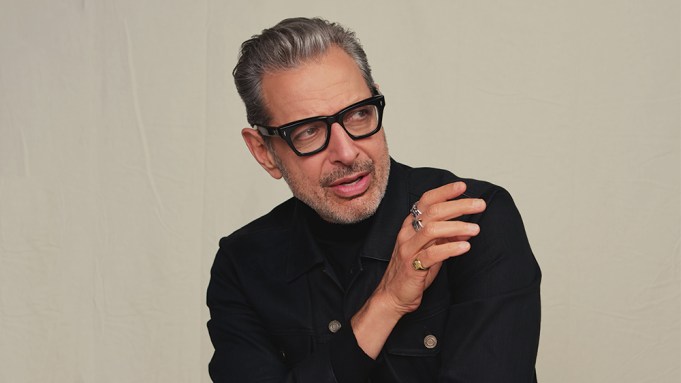 Though he’s been working in films since 1974 — when he played Freak #1 in “Death Wish” — and starred in some of the biggest blockbusters of all time, it seems like only recently that the whole world fell for the charms of Jeff Goldblum. Perhaps it’s the abundance of memes that have taken over the internet; asked for his personal favorite and he cites his “Jurassic Park” co-star Sam Neill “putting his cheek next to the giant shirtless Jeff Goldblum and riding the waves of my breath.” It could be the wry, halting delivery that makes him so much fun to imitate. Or the sense of humor he has about his own image, such as gamely reading “thirst tweets” about himself for Buzzfeed.

This golden age has not gone unnoticed by the star himself. “Things seem to be flourishing right now,” he says. “For whatever reason, I seem to be in a growth spurt. I’m just bursting with gratitude that things have worked out.”

The current surge includes an honor that may or may not rank higher than being declared the Internet’s Boyfriend: a star on the Hollywood Walk of Fame on June 14. It comes in the midst of a busy season for the 65-year-old actor; he’s still promoting Wes Anderson’s “Isle of Dogs” around the world, just recorded a jazz album and has “Hotel Artemis” now in theaters. On June 22, he will open the floodgates for more memes when he reprises his character of Dr. Ian Malcolm in “Jurassic World: Fallen Kingdom.”

All this attention “tickles” the actor, who confesses, “I’m having a good time. I’m just kind of a happy idiot.” Asked if he could pinpoint when the transformation began, he muses that it might be tied to having children; his first of two sons with Canadian gymnast Emilie Livingston was born in July 2015.

“You can’t help but notice a difference when that baby comes,” he says. “The first time my sweet wife told me she was pregnant was the day before our wedding. Things conspicuously changed around then. Things start to transform and grow like crazy. And it coincided with opportunities here and there and I’ve just had this really lovely, rainbow period.”

That joy and goodwill seems evident in everything Goldblum does and says. He’s effusive with adjectives about his collaborators: “The Tall Guy” director Richard Curtis is “a delightful gentleman” and his love interest in that film, Emma Thompson, is “a national treasure.” His “Thor: Ragnarok” director Taika Waititi is “a genius” while co-star Tom Hiddleston is “the master; I sit at his feet.”

He’s equally generous with his fans, admitting that he checks his social media too much during the day. “I don’t want my kids to see me having too intimate a relationship with my phone,” he notes. “But I do check in and people are very delightful. Whether drawing pictures of me or putting tattoos of me on themselves, it’s really fun.”

Goldblum also interacts with fans when he performs with the Mildred Snitzer Orchestra at the Rockwell Table & Stage club in Los Angeles. Intended to be a weekly gig, he’s missed a few shows recently due to film promotions, but looks forward to being back soon. And those fans outside L.A. have a new album to look forward to; on the day we speak, Goldblum is preparing to record in front of a live audience at the famous Capitol Records building. He’s uncharacteristically mum on details, though he does mention he’s doing a song with Sarah Silverman.

Live performance is where it all started for Goldblum, who says: “I first got romantic about being an actor because I saw plays growing up in Pittsburgh. I caught the bug and I’ve had the best times, the most moving times, watching things on stage.” At 17, he moved to New York City, where he studied with renowned acting teacher Sanford Meisner at the Neighborhood Playhouse. Early on, Meisner gave Goldblum advice he took to heart: “It takes 20 years to even call yourself an actor, and then a lifetime to keep getting better.”

Goldblum believes these words to this day. “I feel like I’m on the brink of my best stuff,” he says. “I’m still learning new things every day. Things seem to be getting better and better.”

Goldblum started working fairly quickly in the 1970s with films including “Annie Hall” and “Invasion of the Body Snatchers” before moving into the ’80s with “The Big Chill” and “The Right Stuff.” In 1986, he won raves for his star turn in the remake of horror classic “The Fly,” as a scientist who undergoes a grotesque transformation. A strong bias against genre films was prevalent at the time, but it’s the kind of go-for-broke turn that would probably earn Goldblum an Oscar nomination today. (He was nommed in the short film category for directing “Little Surprises.”)

“I first got romantic about being an actor because I saw plays growing up in Pittsburgh.”
Jeff Goldblum

Ask Goldblum what most people recognize him for, and it’s not surprising to learn his ’90s blockbusters come up. “As you might expect, it’s the ones that sold a lot of tickets that I hear about a lot,” he confirms. “I get ‘Jurassic Park’ and ‘Independence Day.’ But a lot of people say, ‘I saw you on the Apartments.com commercials!’”
And while he’s mostly associated with comedy lately, the actor says recent films will showcase his darker side. “In ‘Hotel Artemis’ I’m not a nice guy,” he notes. “It’s set in the future and I play someone who owns most of the city from ill-gotten gains.”

Later this year, he’ll tackle what he calls one of his toughest roles yet in “The Mountain” from director Rick Alverson. “It takes place in 1954 and me and Tye Sheridan go on a road trip,” Goldblum explains, sounding innocent enough. Then he elaborates, “I play a character based on the real guy who pioneered lobotomies in the 1950s. It’s a dark tale and he was a complicated, controversial figure. Learning all about that guy was…,” he drifts off with a patented Goldblum pause before settling on the word, “challenging.”

And while he’s worked with so many great actors and legendary directors from Robert Altman to Steven Spielberg, there are still plenty of filmmakers he’d love to collaborate with. “I’ve never done a movie with the Coen brothers. I adore them and their movies,” he says. “Likewise, Paul Thomas Anderson. There are a lot of people I’d love to work with.”

As for what there’s left to do, it’s not surprising to hear Goldblum is up for anything. “I love doing a variety of things, light and dark things. I love it all because I’m still trying to get better.”