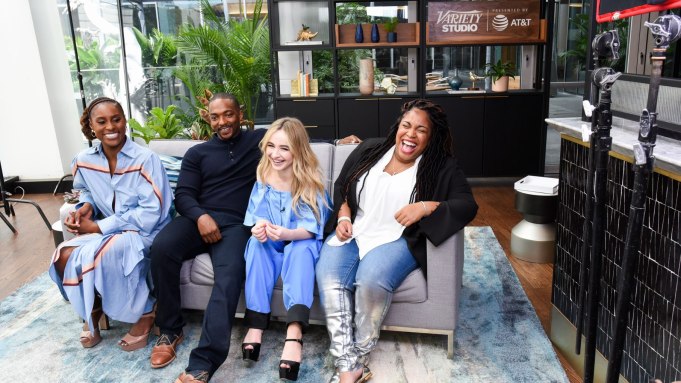 The cast of “The Hate U Give” address the clichéd (and terrible) response many give when approached by issues of race: “I don’t see color.”

The film adaptation of Angie Thomas’ young adult novel tackles several issues pertaining to race and perception, from code switching to police brutality. Centered on a high schooler named Starr (Amandla Stenberg) who witnesses the horrific murder of her friend, “The Hate U Give” is a harrowing look at modern-day racism.

One particular moment brought exasperation and aggravation from the cast and creator. After being informed of all the atrocities the character Starr has faced, her Caucasian boyfriend Chris (played by K.J. Apa) notes that he’s blind to these injustices because “he doesn’t see color.”

The dialogue brought out both laughs and groans from the audience, and the cast itself when revived at Variety’s studio at the Toronto International Film Festival presented by AT&T.

Issa Rae, Anthony Mackie, and Sabrina Carpenter joined author Thomas in educating the masses as to what the correct response is when someone utters the phrase, “I don’t see color.”

“Tell them to get some glasses,” Mackie agreed.

The cast continued on breaking down the issues with this statement: “The problem is not the fact that you see color, the problem is what you think when you see that color,” Mackie continued.

Rae elaborated further, “You’re basically saying I’m ignoring every issue, because I don’t see color. I’m ignoring the fact that my color may be more privileged than your color. It may not experience the same things as your color. It’s so important to acknowledge these things to make the change.”