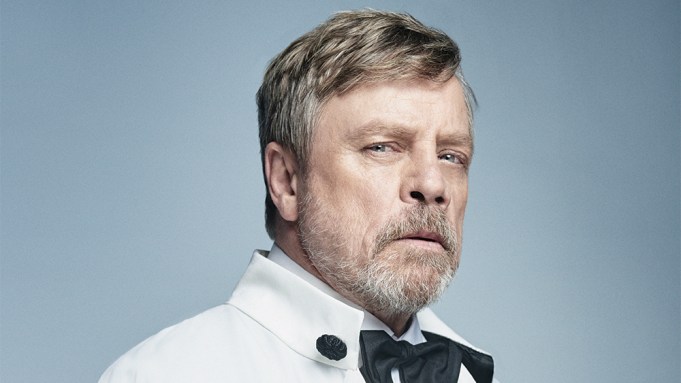 There are few people more associated with stars than Mark Hamill, forever cemented in movie-goers memories as Luke Skywalker in the original “Star Wars” trilogy and now in the recent sequels. And on March 8, Hamill will be graced with another memorable star, on the Hollywood Walk of Fame.

Hamill jokes that this one will also be far, far away. Asked if he knows where it’s being placed, he quips, “I think it’s going to be on the third floor behind the men’s cigarette machine.” It will actually be prominently located near Hollywood and Highland, and the honor is something Hamill is still struggling to grasp. “I’d like to say it’s a dream come true, but I didn’t even dare to dream it,” he says. “And you can get self-conscious about it, like, ‘Am I worthy of this?’”

Hamill, who has often taken to his Twitter account to criticize the current administration, adds: “Then you have to remember, there’s someone on the Walk of Fame that got a star for one crappy reality show. I shouldn’t say reality show, it’s more like a game show.”

In actuality, the only surprising aspect about this honor is that it’s taken this long. At the age of 66, Hamill is one of Hollywood’s most beloved faces; not just a prominent actor, but one of the Good Guys. This year, the father of three will celebrate 40 years of marriage to his wife, Marilou. He’s known as generous to his fans, active with such charities as Force for Changea and Starlight Children’s Foundation. And when’s he’s not in front of a camera or behind a microphone, he’s entertaining fans on Twitter with his mix of self-deprecating humor and what his kids call “Dad jokes.”

As an artist, he’s conquered many media. The original “Star Wars” trilogy needs no explanation, it was a franchise that not only grossed billions but has influenced people on every corner of the globe — perhaps even beyond. Hamill is also considered by many to be the definitive Joker for his award-winning voice work as Batman’s nemesis, which began with “Batman: The Animated Series” in 1992. He’s earned raves on the stage for such acclaimed productions as “Amadeus” and “The Elephant Man.” He’s the co-author of Dark Horse Comics’ “The Black Pearl” miniseries and penned stories for “The Simpsons Comics.” And after a brief final shot in Episode VII, he took on a lead role in “Last Jedi” as a very different Skywalker, which saw the once fresh-faced farmboy had become a haunted shell of his former self.

Traditionally this is where we would warn of spoilers, but if you’re able to breathe, odds are you’ve already seen the eighth installment of the series, in which Skywalker fights one last great battle before crossing over to join the Force for once and for all. (In layman’s speak: he dies.) It’s a beautiful and graceful exit following a powerhouse performance, and one that surprised even Hamill.

“My first thought was, ‘Couldn’t they push this to Episode IX?’” Hamill says with a laugh. “In fact, I remember when George Lucas first asked me to come back, I said, ‘OK, but I have two provisions. No cameos and a run of the trilogy contract.’ So far, I’m zero for three.”

Hamill isn’t criticizing; he’s already dealt with fallout from talking about conversations he had with helmer Rian Johnson to understand how Skywalker could have changed so much to become this broken man. “I lowered my guard and made a public comment that I wish I hadn’t, because that’s process,” he says. “And now people that don’t like it say, ‘Even Hamill hated it.’ I said I had struggled to understand how Luke, the most optimistic character, could become this way. Not anything close to what they’re claiming that means.”

For his part, Johnson told Business Insider that he enjoyed working with Hamill and the “process ended up being very good for the character and also for our working relationship.”

All this is just one of the downsides of social media, which Hamill notes is sometimes “just a new way to insult you personally on a daily basis.” Mostly it’s a positive interaction because, frankly, Hamill is really good at Twitter. He joined in May 2011 when the filmmakers behind “Sushi Girl” asked him to help promote the indie.

“I said some stuff about the premiere and the movie and then I sort of forgot about it,” he admits. “Then weeks went by and my daughter Chelsea said, ‘You haven’t been tweeting in weeks.’ I said, ‘Am I supposed to?’ She said, ‘Dad, you can’t just go on and desert people!’” Since then, Hamill has become a favorite, with more than 2.5 million followers.

He likes to have a sense of humor about it. “One person said, ‘Hey Hamill, an apple would have been better in ‘The Last Jedi’ than you were!’ So I liked it, just to bewilder him.”

Sometimes his joking can get him in trouble, as when he referenced a deleted scene in “The Last Jedi” that didn’t exist between himself and Laura Dern. “I have to be careful because people can get mad at you for teasing them,” he says. “But I like to have fun.”

That fun has already extended to his upcoming Walk of Fame ceremony. William Shatner congratulated Hamill via Tweet, saying: “Congratulations! BTW ask for a star on the south side of the street. I’m on the north side and don’t want to devalue the neighborhood.” The good-natured Hamill responded: “Thanks, Bill, It wouldn’t be as special without a classic Shatner-burn from you! Live Long, But Get Lost- , mh.”