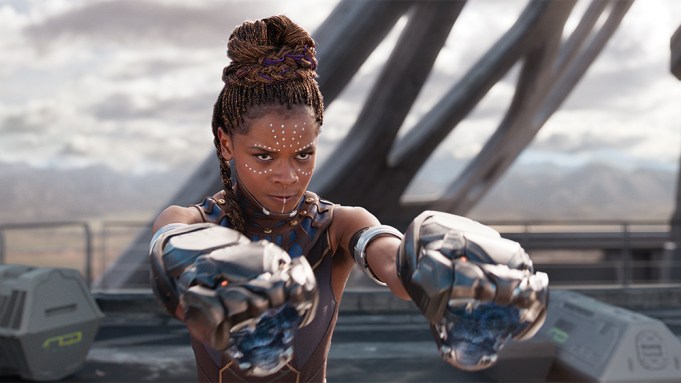 Letitia Wright may not be a Black Panther yet, but after the debut of the highly anticipated Marvel movie of the same name, the 24-year-old actress may be headed for superhero status herself. Wright, who’s appeared in “Humans” and “Black Mirror” and will be seen in Steven Spielberg’s soon-to-be-released feature “Ready Player One,” plays the witty, self-made kid sister of King T’Challa (Chadwick Boseman) in “Black Panther.”

She’s the genius who helps wrangle the space-age technology in the futuristic world of Wakanda. Her inventions heal the wounded, power the city and help defend the people of the kingdom. The morning after the film’s world premiere Jan. 29, Wright spoke with Variety about being part of the game-changing movie and whether she envisions herself in a superhero suit sometime soon.

How did it feel finally seeing “Black Panther” with an audience?

It’s just a huge mixture of everything: being excited, being anxious to see it and then being overwhelmed after. I’m super grateful to be a part of it. I even laughed at the stuff that I was doing as if I was watching a character on-screen. It was cool to hear everybody — what they responded to and what they took from it. It was really good.

You met Snoop Dogg at the after-party. What did he have to say to you?

It was dope. His people came up to me and said, ‘Snoop Dogg wants to meet you,’ and I was like, ‘What? That’s crazy!’ He was just biggin’ it up, just being Snoop Dogg — super, ultra cool. And I was thinking, ‘I’m talking to Snoop Dogg and I’m not nervous.’ I just feel like he’s a big uncle. I told him that he needs to bring back the TV show that he had with his family, and he said, ‘I’m gonna try and do that.’ And he invited me to be in one of the episodes.

You seem to pick your roles pretty carefully — Nish from “Black Mirror” and Renie from “Humans.” What was it about Shuri that appealed to you?

On the page, she was really intelligent. She was so far from the stereotypes that we see all the time. She likes science and she’s super cool as well. I really liked the fact that she was smart and different; she can be an inspiration. In the comic books, she becomes a Black Panther. She’s a queen in her own right. It’s just a phenomenal part. A cartoon drawing brought to life.

I met the creator of the character Shuri [writer Reginald Hudlin] at the premiere. He said it was perfect, and I said, ‘I hope I can continue to grow more with Shuri, if that’s where the future takes us with Marvel.’ Shuri’s young now, but when she grows into an adult, she’s kind of savage. She’s one of the coolest leaders in the comic books.

Did you and Ryan Coogler talk about the possibility of playing the female Black Panther in the future?

We didn’t talk about it in terms of the future. It was something I feel he was playing with [trying] to set up, but it didn’t happen. Hopefully it does. I’m happy that there’s room to allow Shuri to grow. I wanna sit with her a little bit more.

What was it like on set? Did you hang out with the cast in between takes?

Everybody brought their A game every day, as much as we could. For example, I would see Danai [Gurira] in the corner going through her work, really just dedicating herself to it. We all were there for the right reasons. We all cared so much about the project. I would pick on Michael B. [Jordan] in between takes or make jokes with Daniel [Kaluuya]. After we finished filming, we would all meet up and go to dinner and bond. That’s what you can see on-screen, the chemistry of our cast.

Your chemistry with Chadwick is off the charts. How did you find this connection with him?

It was easy, and I’ll tell you why. I feel like it was ordained. I really, really feel like this is just a God thing. Even before I met him, I knew that he was going to play my brother. I just knew that we would connect because of the type of actor he is as well. He’s a person of the spirit, a like soul. Very grounded, down-to-earth, humble. I knew that when I met him, I wasn’t going to try and impress him, to force a friendship. I was just going to vibe and see if we connect on a soul level, and we did. And even in our first scene together, it was kind of like we’ve always been brother and sister.

Plus, I can relate to playing the sister. I have little brothers and sisters and they annoy me a lot, but I love them so much because they’re so smart and witty. But when they come knocking on [the door of] my room, I’m like, ‘Guys, please leave me alone.’ Then, three seconds later, I’m like, ‘Hey, guys. Let’s hang out.’ So that’s what you see on-screen with T’Challa and Shuri. It’s something that everybody who has a brother or a sister in the world can pretty much connect with.

What’s it like to be a part of the first tentpole superhero movie whose cast is almost entirely people of color?

It was really good. It was something we’ve not seen, so it felt surreal and it felt like a bunch of kids going off doing a project that we’re not meant to do — being rebels. And it was surreal watching it. It was refreshing, and it made me feel proud to be a part of it. To know that these types of films, and this type of change, is being embraced. Hopefully, it continues and it becomes normal.