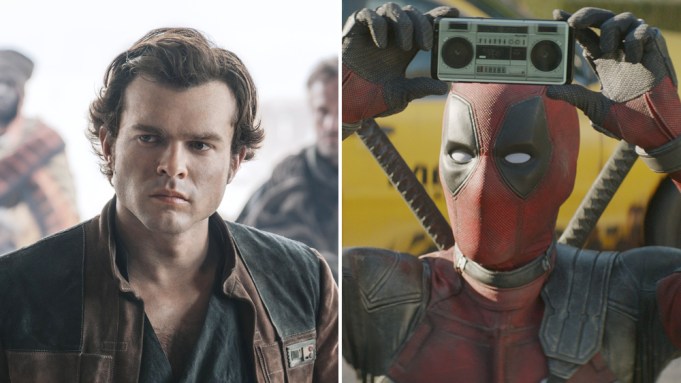 It’s not every day that I feel sorry for an actor, especially one who’s lucky enough to have landed the lead role in a “Star Wars” film. But I honestly began to feel a little bad for Alden Ehrenreich in “Solo: A Star Wars Story.” It was during the scene where, acting opposite Emilia Clarke (who looks like she could eat him alive, and would happily do so as foreplay), he attempts to signify the Awesome Casual Cockiness Of His Inner Being by slouching against a wall, hands on hips, his fingers spread out just so, in a John Wayne-meets-Clark Gable sort of swashbuckling cowboy-stud pose. At that moment, Ehrenreich doesn’t seem remotely like a young version of Harrison Ford’s lone-wolf space pilot; he seems like a sculpture of it. You don’t see the acting — you see the coaching. (“Let it hang out a bit more, Alden. That’s right, spread those fingers. Just keep thinking, I’m the man!”)

I felt bad for Ehrenreich because it’s not his fault that some executive board meeting signed off on the looks-good-on-paper decision to cast him as a junior version of the ballsiest renegade of the blockbuster epoch. Harrison Ford has always been a superb actor — better, in many ways, than he gets credit for. Just watch him in “Raiders of the Lost Ark,” where he never lets Indiana Jones jostle along on a free ride of attitude. Yes, he’s having a blast, but Ford also has that dark-and-stormy undercurrent, which anchors the cliffhanger preposterousness, grounding it in a moment-to-moment reality — his reality. As an actor, Ford is fierce, strong, funny, and sexy, but through it all he’s got gravitas. Whereas Alden Ehrenreich is preppie-handsome but scowling-eyed in a likable weightless way. He belongs in a corporate office — not at war, or racing through the stars. In “Solo,” he looks like he might blow away if his upstart hair weren’t so perfectly plastered down.

It’s a sign of where America is now at as a culture that we’ve gone from Han Solo to watching an actor as frictionless and badass-free as Alden Ehrenreich pretending to be Han Solo…and finding that perfectly acceptable! Why not? We’re still at a “Star Wars” movie! I’ve got my 64-ounce Coke, and the dude is all right. He’ll do! That’s exactly the attitude that could plunge the Democrats into disaster when they choose their next presidential candidate. He’ll do. (Or She’ll do.) Where have you gone, Harrison Ford? A nation turns its lonely eyes to you.

Let’s be clear: My gripe about Ehrenreich isn’t just that he’s “not macho enough” — which is no crime, and not necessarily a problem for an actor. And it’s certainly not Ehrenreich’s fault that he happens to be a mild-mannered and rather neutral-spirited customer. The problem is that because Ehrenreich, in “Solo,” puts all his energy into creating a studied facsimile of masculine moxie, doing what amounts to a kabuki impersonation of it, he can’t assert it and tweak it, revel in it and lighten it at the same time. And that’s the devil-may-care essence of what Harrison Ford did in the first two “Star Wars” films. He wasn’t just a brusque customer — he was a wise-ass cynic, a winking-outside-the-frame grouch like Bogart in “Casablanca” (“I was misinformed”), a guy who originally went “solo” because he didn’t play well with others. As a character, Han Solo is all about his tough-bordering-on-heartless insouciant edge, and that’s a lot like rhythm. Either you got it or you ain’t.

But let’s not despair for America yet. There is, in fact, a hero out there who does have that highly spiced what-the-hell aspect, that quality of saving the day because of how little he gives a f–k, and that’s the dirty-minded slasher-witted superhero of “Deadpool 2.” He’s played by Ryan Reynolds, who with his singed face and even more burnt-out punchlines (“You’re so dark! Are you sure you’re not from the DC Universe?”) comes on, once again, like the Jim Carrey of the ’90s playing the Phantom of the Opera on a meth bender. There’s more expression — more sheer awesome cutting-ness — in Deadpool’s psychotic ninja skills than there is in Alden Ehrenreich’s face. Yet the key to the character’s appeal is his bracing 21st-century redefinition of machismo. “Deadpool” may be a badass, but more than that he’s a super-bitch. That’s what’s liberating about him.

The character draws on the rise of gender fluidity and on decades of what you might call gay comic sensibility — not to cliché-ify it, or (God knows) to squeeze it into a homophobic box, but to acknowledge that when Deadpool says things like or “All these elderly white men on the walls. I should have brought my rape whistle!” or “Sorry I’m late! I was rounding up all the gluten in the world and launching it into space, where it can’t not hurt us ever again,” he’s drawing on a tradition of postmodern wasp-stinger attitude that extends from Oscar Wilde to Quentin Crisp to Paul Lynde to John Waters to Paul Rudnick to David Sedaris to RuPaul to Andy Cohen.

The character of Wade Wintson Wilson isn’t gay, per se, but in the original “Deadpool,” a number of the jokes bounced off the ways that he strayed outside the box of white male heteronormative thinking, and in “Deadpool 2” he’s once again a triumphantly reckless appropriator of gay comedic style, served up in a torrent of Mad magazine self-mockery. The film is actually a great example of why appropriation needn’t be a sin but can, at its best, express the cross-pollinating aspects of our violently splintered mashup culture. To listen to Deadpool crack wise (“We need to build a f–king team. We need ‘em tough, morally flexible, and young enough so they can carry this franchise 10-12 years”) is to hear the impulse of the outsider taking over the arena of mass culture. Does that mean the impulse has been neutered? Perhaps. But maybe only if you’re not laughing.

I did laugh, but more than that I felt connected to the bombs-away ebullience of Ryan Reynolds’ performance. In “Deadpool 2,” he turns bitchery into a savage kind of skewed pop-star heroism. He’s cool, in his way, because even though he’s playing a scarred freak with a coiled sneer, he leads every scene. Whereas Alden Ehrenreich, in “Solo,” looks like a movie star but comes off like a follower pretending to be a leader. He’s a rebel being told what to do, and that’s just the sort of rebel an empire would love.