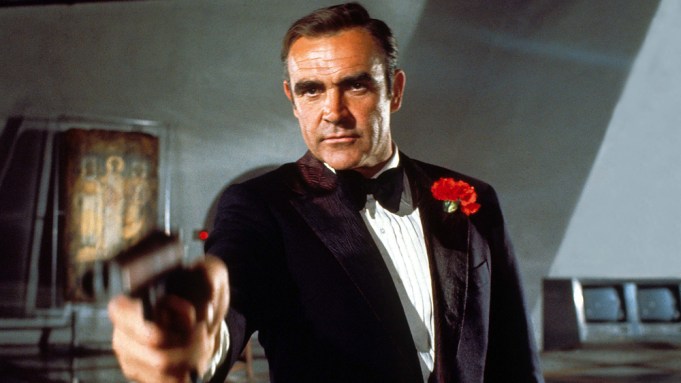 In case you hadn’t noticed, the filmmakers chosen in recent years to direct James Bond films represent a serious break with the past. The new way really started when the series’ overseers — who tend to weigh these decisions as if they were matters of state — chose Marc Forster, the acclaimed director of “Monster’s Ball” and “Finding Neverland,” to direct “Quantum of Solace.” The trend continued when Sam Mendes, the Oscar-winning director of “American Beauty,” was chosen to make “Skyfall,” and Danny Boyle, the Oscar-winning director of “Slumdog Millionaire,” was chosen to helm Bond 25 (even though he left before he began).

Now, with the choice of Cary Joji Fukunaga, the trend continues. Fukunaga has no Oscars under his belt, but he is, by any standard, an audacious and celebrated filmmaker. His first feature, “Sin Nombre,” took the best director prize at the 2009 Sundance Film Festival. He followed that up with his innovative “Jane Eyre,” and then the volatile, unblinking, hard-hitting “Beasts of No Nation,” a sweepingly accomplished and acclaimed photo-realist saga that took in the violent chaos of post-colonial Africa through the shocked stare of a child soldier. He’s a world-class filmmaker (the fact that he’s the first American chosen to direct a Bond film feels ironically balanced by the global vision his work has displayed), and I haven’t even mentioned his finest accomplishment, and the one that’s most relevant to Bond: his supremely sensuous and assured direction of the first season of “True Detective.”

Yet it wasn’t always this way. The Bond series had used the occasional respectable director before (notably Michael Apted), but from Terence Young (“Dr. No”) to Peter R. Hunt (“On Her Majesty’s Secret Service”), from Guy Hamilton (“Goldfinger”) to Martin Campbell (“Casino Royale”), the best Bond films have always been helmed by highly diligent craftsmen, and no one has ever pretended they were filmmakers of great personality. What mattered, in a sense, is the fact that they weren’t. This meant that they were able to serve the material and, somehow, not get in the way. The directors were never the stars anyway. Sean Connery was the star, and then, when actors who weren’t nearly as magical in the role took over, James Bond himself — the character, the mystique, the trappings — was the star. But that’s the trend that ultimately got the Bond series in trouble.

Simply put: These movies, tapping our nostalgia for the 20th century in a nearly cyclical way, will probably make money for the next 50 years, but that said, what’s really left for James Bond going forward? You can make him into an elegantly brutal action hero, but no matter how sharp his moves, the Bourne series already has you trumped. You can come up with an “outrageous” opening sequence and a handful of other don’t-try-this-at-home impossible stunts and escapes, but Tom Cruise has now trumped you as well. You can come up with a villain whose plan for world domination, or simply for acting like a supreme pest, is so diabolical that…oh, please, let’s not even go there. I mean, what contemporary thriller doesn’t already have one of those?

Over the decades, the Bond mojo has been borrowed, stolen, chipped away at; it’s been fatally shaken and stirred. Yet something miraculous happened in 2006. For once in recent Hollywood history, the idea of a “reboot” wasn’t just a euphemism for let’s do this again, but not as well. “Casino Royale,” the first Bond film to star Daniel Craig, was — and is — a revelation. It went right back to the ethos of the Ian Fleming novels (its big suspenseful heart-in-the-throat central sequence was…a card game), and it had much more than cleverness. It had grandeur, and extraordinary surprise (every time I see it, I’m still taken aback by where it goes and how it gets there), and Daniel Craig’s magnificent glower, and it had something at stake, and more than that, it had romance. It had a female spy, played by the great Eva Green, who in the deceptive boldness of her amorous play, the is she or isn’t she? trickiness of her presence, brought James Bond, that old walking-male-gaze-in-a-dinner-jacket, right into the 21st century. “Casino Royale” was, in every way, a new beginning. But the series’ bold new depth and flavor seemed to wind down as soon as it began.

“Quantum of Solace” was trash, the recent “Spectre” was even lower-grade trash — and I’m sorry, I know “Skyfall” is considered by many to be the best of the Daniel Craig Bond films, but though Sam Mendes really did do all he could to bring it, it’s my feeling that he “deepened” Bond in the wrong way, giving him a tragic backstory that didn’t so much heighten the character as diminish him. So even though I’ve applauded, and still do, the experiment of bringing in a real filmmaker to make over James Bond, thus far (to me, at least) it hasn’t entirely worked.

Yet I still believe it’s what’s necessary. Two years ago, when Mendes announced that he was stepping down, it was my suggestion that Kathryn Bigelow take over. I still think that would be an inspired choice (for the series, and for her). And the reason Cary Fukunaga has the potential to be an ideal filmmaker for the Bond series is all over his direction of “True Detective.” Simply put, he has a depth-charge understanding of men…and women. And that, as much as anything, is what the James Bond series now needs to be about.

Because if it’s not about that, then what is it about? In the early ’60s, Sean Connery’s Bond, while he now comes off as a caveman from another world, was an icon of erotic adventure. That’s what gave him his glow. You can say that the Connery 007’s brute seduction tactics have no place in the #MeToo era, and you’d be right, but at the time they passed for a kind of swarthy chivalry. Part of the decadence of the action genre, as it developed out of the Bond series (which had itself been sprung from the seed of “North by Northwest”), is that it became entirely about men clashing with other men. Action became about revenge, and vandalism, and lone-wolf steroid heroes asserting their righteous creed. Action became infantilized, and the Bond films, while they ruled for a while in terms of stunts (especially in the era we might characterize as middle-period Roger Moore), became a jokey showboating part of that.

You might say: No harm there. What’s wrong with a little good old-fashioned infantile action escapism? But the Bond series, at its best, always transcended the allure of mere action, and our nostalgia for it is most assuredly about something more elegant and profound. If you go back and watch the great early Bond films — “Dr. No,” “Goldfinger,” “From Russia with Love,” “On Her Majesty’s Secret Service” — they have a macho poetic quality, a lyrical sense of life hanging in the balance. They are romantic spy movies, and what went out of them, for too long, was the romance. Without it, Bond is just a smooth Brit in a tux going through the motions.

Does Cary Joji Fukunaga have the chops to pull off a great Bond movie? Most definitely. But you could argue that contemporary movies are now drowning in chops. The reason the announcement of a new director for the James Bond series is a headline event is that after all the tawdry repetition and datedness, Bond still means something in our culture. But what? Who is James Bond? Who was he then, and what can he be now? That’s the question Cary Fukunaga needs to figure out. If he dares to answer it with imagination, he’ll do more than sustain a franchise. He’ll keep this casino royale.