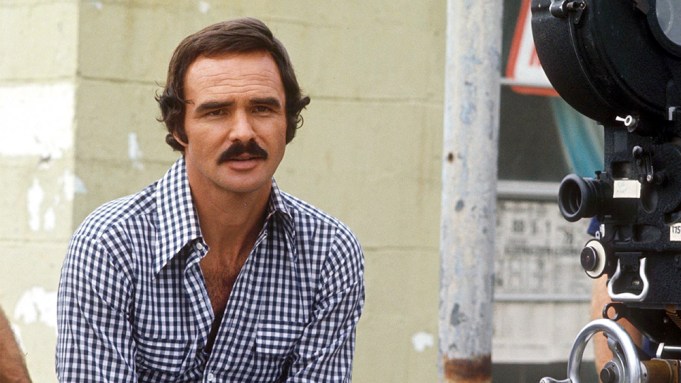 You could say that no actor ever fitted into his time, or defined it, as quintessentially as Burt Reynolds. His box-office sizzle lingered into the early ’80s, but the classic Reynolds era will always be the 1970s, a decade he swaggered through with a slightly brooding easy-livin’ macho twinkle that no other movie star could touch. He was something unique: the first Hollywood stud who knew how to laugh at himself, not just off camera but on camera. Reynolds looked like a smiling dreamboat Greek god with a mustache, and the thing about his handsomeness was how much character it had. The eyes that could melt you with their crinkly charm, or stare off lonely and a bit lost, or turn into slits of anger. The thick lips that pulled back into a smile that let you know he knew how irresistible he was. He looked like Marlon Brando if Brando had been a happy camper.

The ’70s are now thought of as such a sleazy cheesy mellow decade that it’s worth recalling how much good old powder-keg macho was still embedded in it. At the movies, it was an era of road-race action flicks and vicious revenge thrillers and kung fu, and it’s no accident that Burt Reynolds came to big-screen prominence in “Deliverance” (1972), a movie that was all about showcasing how well he knew how to fight. As Lewis Medlock, the toughest of a group of over-civilized city men who canoe down a river in redneck Georgia, Reynolds was implacably dangerous in a grippingly life-size way. The moment when he saves his comrades from a couple of hillbilly rapists by firing an arrow from a recurve bow is the moment that made him a star. The look on his face when he fired that shot said, “I’m someone you don’t want to mess with.”

But there was another side to Burt Reynolds that was just as central to his stardom. Most of the actors of his era — Nicholson, Pacino, De Niro — were all about what volatile Method artists they could be, wearing their raging insides on the outside. Reynolds, however, had no visible angst, no demons. He glided through his movies on a sheen of lightly buttered mockery, and his refusal to take himself seriously became the basis of his superstardom. He was the first ironic macho jokester.

You could argue that the key stepping stone for Reynolds came between his diligent years of TV work, going back to the late ’50s, and his big-screen Hollywood breakthrough. It was when he began to appear on talk shows — Johnny Carson, and also the afternoon gabfests. It was that format that allowed Reynolds to perfect the image of himself as a dimpled schmoozer par excellence, not so much an actor as a permanent party guest, the kind of guy you want to have around because he deflates the stuffiness in the room and makes everyone feel good. Reynolds, off camera, was a witty and intelligent sly dog, and there was a grace to his self-deprecating humor. He gave off the vibe that he was just like you.

“Deliverance” is one of the vintage movies of the ’70s, and the finest film Reynolds ever acted in (at least, until “Boogie Nights”), but by the time he starred in Robert Aldrich’s entertainingly rough-and-tumble prison football comedy “The Longest Yard” (1974), the Reynolds persona had now integrated the talk-show Burt — the hard case with a soft filling, the manly bruiser who winks at the audience, because he’s really winking, on some level, at his own appeal. And that, of course, was the ’70s too: the era of laid-back hip slumming. Burt Reynolds was the king of it. When he posed naked on a bearskin rug for Cosmopolitan in 1972, he launched his image as the sexiest man alive — this was two years before the founding of People magazine — and he would more or less cling to that image for the rest of the decade. Yet that Cosmo centerfold also marked him as a transitional figure: His shit-eating grin, and the bent cigarette dangling from his mouth, turned his beefcake appeal into a knowing punchline. He refused to take even his own sexiness seriously. That was his charm, but it would also be his undoing.

There’s no good reason why Burt Reynolds, in 1977, shouldn’t have made “Smokey and the Bandit,” a low-down diverting rogue redneck chase comedy, directed by the former stuntman Hal Needham, that solidified Reynolds’ image as the wisecracking macho chucklehead champion of what we would now call Trump Country. There’s no reason he shouldn’t have gloried in the fact that the movie grossed $125 million  — a staggering amount of chicken feed for 1977. But there’s a good reason why Reynolds should not have done what he did after that: continue to churn out dumb-hick action comedies (along with the occasional sodden lifestyle dramedy, like “Starting Over” or “Paternity”).

He turned down more roles than you could shake an Oscar at (Michael Corleone, James Bond, Han Solo), and he made way too many bad movies. His ability to mock himself, which started out as the secret source of his charisma, became something else: a tic, an almost masochistic refusal to invest anything of value in his own success.

Reynolds, in his way, was an early victim of the fishbowl celebrity culture. His life got dragged through the tabloids, but more than that he was such a major movie star that he forgot about even trying to be an inspired actor. After the ’70s, he never found the right vehicles — though “Sharky’s Machine” (1981), which he directed, did a lightweight job of resurrecting his down-and-dirty side as ‘70s nostalgia. And maybe the reason he never found the right vehicles is that he lacked the belief in himself to connect with them. He was an actor who became a knowing, joking hambone star and then, for a bit (around the time of “Stroker Ace”), merely a joke.

It’s not just that his career needed to be saved. He needed to be rescued from himself, and it was Paul Thomas Anderson who finally did it. Reynolds wasn’t Anderson’s first choice to play the role of Jack Horner, the courtly and beleaguered L.A. porno film director who discovers Mark Wahlberg’s Eddie Adams and transforms him into Dirk Diggler, the celebrity stud of 16mm. Anderson had originally offered the part to Warren Beatty, but Beatty was too self-protective; he thought it would hurt his image. That fatal caution made possible a small piece of film history, because Reynolds’ performance in “Boogie Nights” — tough, wry, amused, crestfallen, cool as hell — isn’t just the greatest acting he ever did. It shows you the actor he might have become if only he had taken his gifts more seriously. He has chops galore in “Boogie Nights” (Horner’s whole unspoken paternal melancholy), as well as a lingering mystique. And that’s because Reynolds, for once, isn’t laughing on the inside.

Then again, to say all that is to come off sounding just a bit snobby about Burt Reynolds. Because this was an actor who, for such a long time, reigned at the box office because he gave enormous pleasure to legions of fans not by trying to act his way to an Oscar, but simply by showing up, in movies he was usually better than, and acting out a version of himself: the sexiest man alive who knows it’s not really such a big deal to be the sexiest man alive. What matters is that you have the most fun possible doing it.