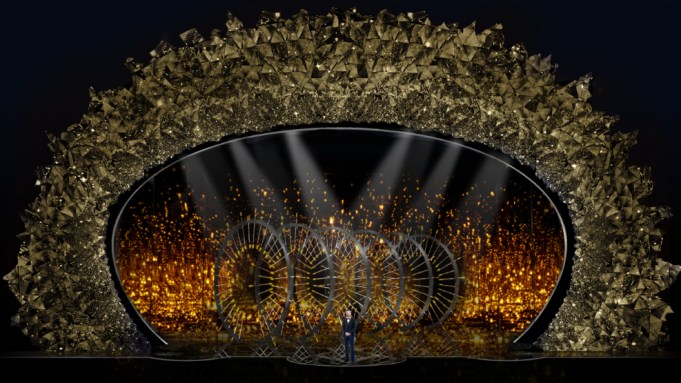 You’ll see a lot of Broadway at the Oscars this year.

There are ties to the theater industry, of course, in nominees like Laurie Metcalf (“Lady Bird”), Denzel Washington (“Roman J. Israel, Esq.”), and Robert Lopez and Kristen Anderson-Lopez (“Coco”), all with projects now on Broadway (“Three Tall Women,” “Frozen”) or soon to start previews (“The Iceman Cometh”). But Broadway is also all over the ceremony stage itself, in a set designed by theater regular Derek McLane.

Last year the look was art deco. This year? Crystals — 45 million of them, creating a geode-like proscenium. “The theme is all about light and reflectivity,” McLane says in an interview about 10 days before the ceremony. “This one is much more abstract.”

It’s McLane’s sixth year designing the set at the Dolby Theatre — and he first got the gig thanks to his theater work. He was brought aboard for the 2013 ceremony by Craig Zadan and Neil Meron, who at that point had recently worked with McLane on the 2011 revival of “How to Succeed in Business Without Really Trying.”

Except for the fact that the Oscar set is built for a live stage show, designing it isn’t much like work on a play or a musical, McLane says. For one thing, he doesn’t have to worry as much about durability, which is a concern for theater producers who hope their new musical will run for years. There’s also less automation in the Oscar set, in part because scene transitions happen during commercial breaks.

Besides, there’s no concrete narrative to guide the design. “This is more decorative,” McLane notes. “It needs to stand by itself as a piece of design, and one big question is: How do you do something that feels elegant and grand without being bombastic? How do you avoid visual clichés like the 20-foot-tall statuette?”

Rob Paine, the Oscars’ supervising producer, echoes McLane’s concerns. “I think everyone expects the Oscar set to be very grand, larger-than-life,” he says. “So it’s a challenge to always try to top the previous year, or to create something that’s never been seen before.”

With the proscenium inspired by an image McLane saw of a room at the Swarovski headquarters in Austria — the company is providing all those crystals — this year’s design incorporates a handful of distinct looks, from mirrored arches to a 1920s movie palace to a series of shifting, mirrored panels with baroque accents (and LED screens on the back). There’s also a more industrial backdrop, created by a series of big, sculptural rings accented with light bulbs. The aim is to achieve a different look for each of the 13 to 15 segments between commercial breaks.

“How do you do something that feels elegant and grand without being bombastic?”
Derek McLane

McLane’s work on the Oscars, in this and other years, has used light-up elements that he’s since started to work into some of his stage designs — like, for instance, his set for the pre-Broadway tryout of “Moulin Rouge,” bowing in Boston this summer. (This spring, he’s got Broadway’s “Children of a Lesser God” and Off Broadway’s “Jerry Springer: The Opera” and “Good for Otto” on tap.)

Sometimes, though, the Oscars — with cameras that rove all over the stage — make him think about things he never has to worry about in theater. For his first design in 2013, he recalls the director calling him up onstage. “He said, ‘Derek, what’s with this piece of scenery?’” he remembers. “‘There’s nothing on the back of it!’”