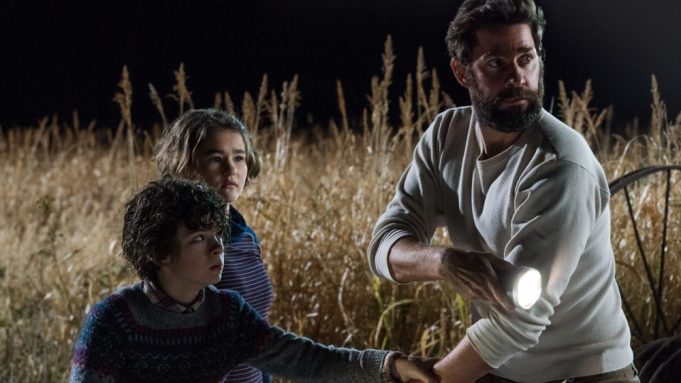 “A Quiet Place” had another noisy weekend at the domestic box office, reclaiming the No. 1 slot in its third frame.

John Krasinski’s thriller co-starring Emily Blunt continued on its stellar run, earning $22 million from 3,808 locations. “A Quiet Place” had another impressive holdover, declining only 34% to bring its domestic tally to $132 million. That was enough to top Dwayne Johnson’s “Rampage” and Amy Schumer’s “I Feel Pretty.”

Bumped down to No. 2, Warner Bros.’ “Rampage” collected $21 million in 4,115 theaters in its second weekend. So far, the film has made $66.6 million at the North American box office. Luckily, “Rampage” has been able to justify its expensive price tag with a strong international showing. It has crossed the $200 million mark overseas, claiming $57 million this weekend. That brings its global tally to $283 million.

STX’s “I Feel Pretty” bowed in third with $16.2 million from 3,440 theaters. The Schumer-led comedy also features Michelle Williams, Rory Scovel, Emily Ratajkowski, Busy Phillips and Aidy Bryant. “I Feel Pretty” is currently averaging a tepid 34% rating on Rotten Tomatoes, as well as a B+ CinemaScore.

Another newcomer, Fox Searchlight’s “Super Troopers 2,” opened in fourth, burning by projections to make $14.7 million from 2,038 locations. The sequel reunites the 2002 cult classic’s leads — Jay Chandrasekhar, Kevin Heffernan, Steve Lemme, Paul Soter, and Erik Stolhanske — collectively known as Broken Lizard. The stoner comedy has a 35% rating on Rotten Tomatoes, the same score as the first film. The audience score of the sequel, however, is down significantly from the original’s, at 68% compared to the first movie’s 90%. The first film launched with $6 million.

“Super Troopers 2” did more than double the numbers that estimates suggested. Frank Rodriguez, head of distribution at Fox Searchlight, says the movie’s key demographic of males between the ages of 25 and 49 is to thank. Aside from action hero movies, Rodriguez says it’s a generally underserved group.

“People just want to find something they can have a good time with,” he said. “This audience knew they’d laugh and have a communal experience that makes them feel good.

The final weekend opener is Lionsgate’s Codeblack Films’ “Traffik,” which took in $3.9 million in 1,024 theaters.

Rounding out the top five is Universal and Blumhouse’s “Truth or Dare.” Lucy Hale and Tyler Posey lead the thriller, which scored $7.9 million in 3,068 locations. In total, the horror film has made $30.4 million in two weeks. “Truth or Dare” has pulled in $7.9 million internationally, combining for a global tally of $38.3 million.

The domestic box office is up 12.6% compared to the same weekend last year, though the year to date box office is down 2.4%. That could change next weekend as “Avengers: Infinity War” eyes a monstrous opening weekend.

“The industry is bracing for the record-setting debut of the highly anticipated ‘Avengers: Infinity War’ that is expected to break through the $200 million opening weekend sound barrier as the summer movie season of 2018 gets off to an early and auspicious start,” said comScore box office analyst Paul Dergarabedian.