Continue to Variety SKIP AD
You will be redirected back to your article in seconds
Nov 10, 2018 8:37am PT

‘The Grinch’ to Snag Box Office Crown With $67 Million 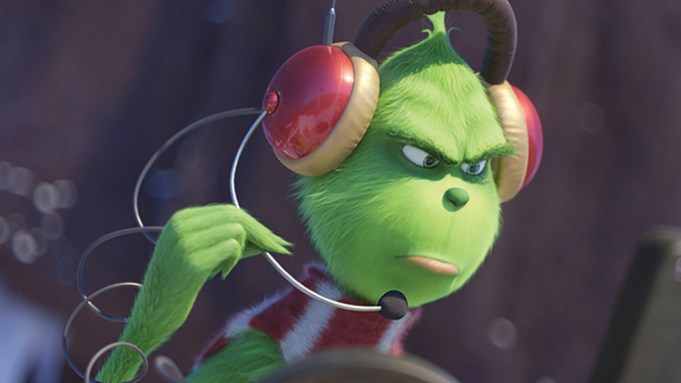 Courtesy of Illumination and Universal Pictures

His heart may be small, but that doesn’t mean his box office returns will be.

“Dr. Seuss’ The Grinch” is looking to top the weekend box office in its debut with an estimated $67 million from 4,141 North American locations.

The film has an early Rotten Tomatoes score of 54% and has landed an A- CinemaScore.

“The Grinch” is Illumination’s second Seuss story adaptation after “The Lorax,” which opened in 2012 to $70.2 million and totaled $348.8 million worldwide.

Fox’s “Bohemian Rhapsody” should take in another $29 million in its second weekend to land second place at the box office. That will bring its domestic cume to $98.1 million. Rami Malek stars as Freddie Mercury in the biopic, which has also earned $110.5 million overseas.

Holdover “The Nutcracker and the Four Realms” and openers “Overlord” and “The Girl in the Spider’s Web” should battle it out for third place, each headed for around $9 million with “Spider’s Web” slightly below with $8.5 million.

“Nutcracker and the Four Realms,” in its second weekend, has so far taken in $28 million. Even with this weekend’s take, the Disney pic still has a ways to go to profitability — it had a production budget of around $125 million. “Nutcracker” has also taken in $39 million overseas.

“Overlord” follows a group of American paratroopers who drop into Nazi-occupied France on the eve of D-Day during WWII. As they struggle to carry out their seemingly impossible mission, they discover a secret Nazi lab carrying out terrifying and bizarre supernatural experiments. The film is sitting at 81% on Rotten Tomatoes and earned a B CinemaScore.

“The Girl in the Spider’s Web” is opening at 2,929 locations for Sony and took in $3 million on Friday. Claire Foy stars as Lisbeth Salander in the most recent adaptation of Stieg Larsson’s Millennium series. Fede Álvarez directed “Spider’s Web” from a script he co-wrote with Jay Basu and Steven Knight.

The previous Millennium installment, 2011’s “The Girl With the Dragon Tattoo,” starred Roony Mara in the Salander role alongside Daniel Craig as journalist Mikael Blomkvist, this time played by Sverrir Gudnason. “Zodiac” helmer David Fincher directed, and the film opened to $12.76 million on its way to a $232 million run, with $130 million from international audiences.

Election drama “The Front Runner,” starring Hugh Jackman as fated Democratic presidential candidate Gary Hart, has its limited opening this weekend at four theaters. The Sony-Columbia film made $11,000 on Friday for a projected $42,000 for the weekend. That would bring the domestic cume to $62,200. “The Front Runner” goes wide Nov. 21.