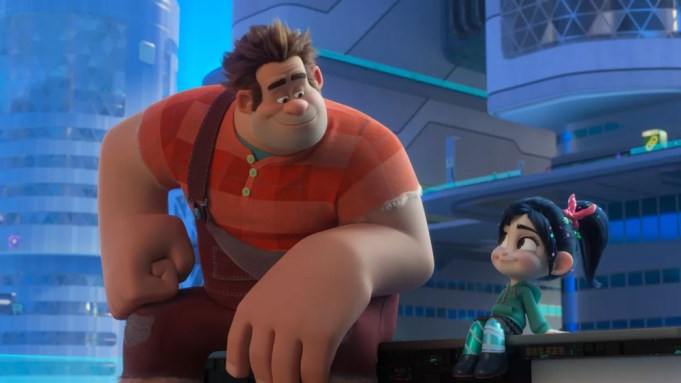 “Ralph Breaks the Internet” and “Creed II” are looking to have some of the most successful Thanksgiving turns of all time, edging the holiday weekend towards a potential new record.

Disney’s “Wreck-It Ralph” sequel should debut to an estimated $84.9 million for the five-day weekend from 4,017 locations, slotting in just behind 2013’s “Frozen,” with $93.5 million, for the best Thanksgiving opening of all time. It earned $21.7 million on Friday on its way to a forecasted $50.5 million three-day total.

“Ralph Breaks the Internet” just barely topped 2012’s “Wreck-It Ralph,” which opened with $49 million over three days on its way to $189 million domestically and $471 million worldwide. John C. Reilly and Sarah Silverman reprise their roles in the sequel, with newcomers Taraji P. Henson and Gal Gadot rounding out the cast.

“Creed II,” which marks Michael. B. Jordan and Sylvester Stallone’s returns to the ring, is looking to take in $56 million from 3,359 North American locations for its Wednesday-Sunday opening. The MGM film earned $14.129 million on Friday for a three-day estimate of $53.6 million. It’ll mark the best Thanksgiving opening for a live-action film, as the top six spots for Thanksgiving openers belong to animated Disney films. For best live-action debut, “Creed II” will knock out 2007’s “Enchanted,” starring Amy Adams, which earned $49 million. The first “Creed” installment debuted to $42 million over the Thanksgiving weekend in 2015.

A slew of holdovers will fill out the last three spots in the top five, with the second and third frames, respectively, of “Fantastic Beasts: The Crimes of Grindelwald” and “Dr. Seuss’ The Grinch” battling for third with about $41 million each through the Thanksgiving holiday. Warner Bros.’ wizarding world sequel has so far totaled $290 million worldwide. The latest Grinch adaptation, from Universal and Illumination, has earned $161 million domestically with another $25 million from overseas markets.

“Robin Hood,” starring Taron Edgarton and Jamie Foxx, is bottoming out, with a debut of $14 million estimated from 2,827 North American locations over the five-day holiday. Lionsgate’s action-adventure caper took in $3.46 million on Friday for about $8 million over the three-day weekend. It cost nearly $100 million to make.

Otto Bathurst directed the latest adaptation of the legendary hero’s tale from a script by Ben Chandler and David James Kelly. Ben Mendelsohn, Eve Hewson and Jamie Dornan also star. Critics ravaged the film, which is sitting at an 11% on Rotten Tomatoes with a 52% Audience score and B CinemaScore.

Awards darling “The Favourite” earned about $190,572 on Friday in limited release at four theaters for an expected weekend haul of $415,000. That makes for an excellent per-screen average of $103,750 for the Fox period piece starring Olivia Colman, Rachel Weisz, and Emma Stone.

Sony’s “The Front Runner” made its final expansion to 807 locations this weekend and should bring in a lukewarm $650,000 for a cume of $1.05 million. Peter Farrelly’s “Green Book,” starring Viggo Mortensen and Mahershala Ali, also expanded to 1,063 sites, but is expected to yield just $7 million over the five-day weekend. The Participant Media and DreamWorks Pictures film has been hit by controversy over Mortensen’s use of the N-word at a Q&A earlier this month, with the star subsequently apologizing.

The total Thanksgiving box office is estimated to bring in around $306 million, topping 2013’s $295 million for the best Thanksgiving holiday of all time.