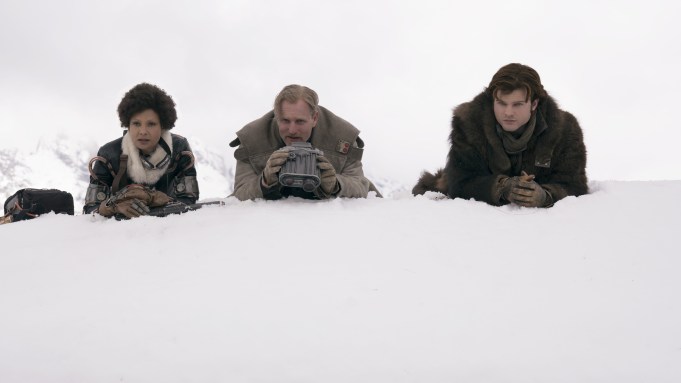 Was “Solo: A Star Wars Story’s” disappointing opening a case of franchise fatigue or the result of tentpole overcrowding at the box office? Its sophomore weekend could help crystallize what went wrong and where the “Star Wars” spinoff goes from here.

A strong holdover from the Han Solo origin story would signal that perhaps moviegoers were still barbecuing or catching up on “Deadpool 2” over the holiday weekend, rather than dismissing the storied franchise’s latest outing. The “Star Wars” installment is eyeing between $50 million and $60 million at the domestic box office over the weekend. Even if it reaches the higher part of that range, it’s unlikely “Solo” will hit the second-weekend totals of its predecessors. The first “Star Wars” anthology film, “Rogue One,” made $64 million in its second weekend in 2016, while 2017’s “The Last Jedi” earned $71 million in its sophomore weekend.

Disney and Lucasfilm’s second anthology film came in way under estimates, stumbling over the Memorial Day weekend with $103 million domestically and $84 million overseas off its $250 million budget.

The third frame of “Deadpool 2” should make around $25 million to $30 million. As of Tuesday, Ryan Reynold’s raunchy superhero sequel topped the $500 million mark worldwide in under two weeks. The 21st Century Fox film has earned $218.5 million in North America, along with $287 million internationally.

Since Fox moved the release of “Deadpool 2” up by two weeks to May 18, no other tentpole releases had filled the slot. Three new films will provide counter-programming against the recent takeover of action-adventure titles.

“Adrift” hopes to anchor $7 million to $11 million in 2,900 locations. Shailene Woodley and Sam Claflin star as a couple who set sail across the ocean in 1983. Loosely based on a true story, the two get stranded in the middle of the Pacific Ocean during a hurricane and attempt to navigate to Hawaii without communication or tools. Baltasar Kormakur directed the STX drama from a script by David Branson Smith, Aaron Kandell and Jordan Kandell.

Meanwhile, Johnny Knoxville’s “Action Point” is tracking between $4 million and $7 million, though estimates show it could make as much as $10 million from about 2,000 screens over the three-day period. The R-rated comedy, directed by Tim Kirkby, is Knoxville’s fifth collaboration with Paramount Pictures.

“Action Point” follows Knoxville as the owner of a low-rent, poorly designed, and generally unsafe amusement park in New Jersey called Action Park. The film features stunts in the vein of Knoxville’s earlier comedies, such as “Jackass” and “Bad Grandpa.” Given the success of those movies, “Action Point” should make back its $19 million budget. The original “Jackass” opened in 2002 with $22.8 million. Its subsequent titles boasted bigger launches — 2006’s “Jackass: Number Two” debuted with $29 million, 2010’s “Jackass 3-D” with $50 million, and finally 2013’s “Jackass Presents: Bad Grandpa” with $32 million. The franchise has earned over $356 million in total.

The final wide release is Jason Blum’s “Upgrade,” which looks to make around $3 million in 1,400 locations. “Saw” and “Insidious” helmer Leigh Whannell wrote and directed the horror title, which premiered at this year’s South by Southwest. Logan Marshall-Green plays a man who gets an experimental computer chip implanted in his spinal cord after he’s left paralyzed following a mugging. Betty Gabriel and Harrison Gilbertson also star.