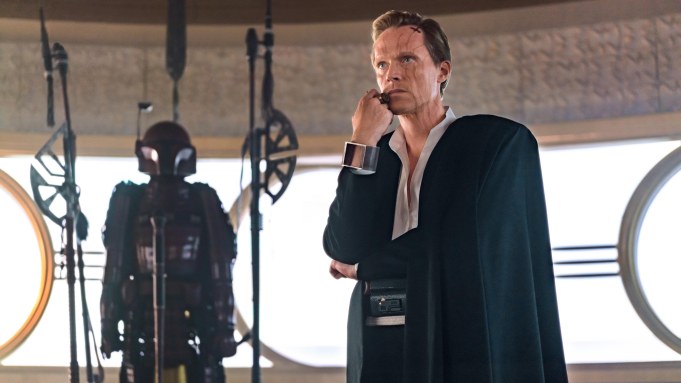 “Solo: A Star Wars Story” is forecasted to earn a disappointing $29 million in its second frame from 4,381 North American locations.

The Disney-Lucasfilm movie brought in $84.4 million in its opening weekend along with $63 million from overseas markets for a total of $147.4 million.

Should the weekend two estimate hold, “Solo” will have declined by 66% into its second frame.

The 12th Star Wars installment’s weekend two total is likely to top the weekend box office, but not by much. “Deadpool 2” is still making a strong showing with an estimated $23.5 million from 4,161 domestic sites for its third weekend, which would bring its domestic total to $254 million.

The lack of traction for “Solo” indicates that Disney was unwise to bring out another “Star Wars” title a mere five months after launching “Star Wars: The Last Jedi,” which took in $71 million in its second weekend on the way to a $620 million domestic haul. The first anthology film, “Rogue One: A Star Wars Story,” made $64 million in its sophomore frame in 2016, declining 59%, on its way to a $532 million domestic total.

If “Solo’s” numbers continue to plunge, it may not crack $200 million domestically by the end of its run.

“Avengers: Infinity War” will battle it out with the debut of Shailene Woodley’s “Adrift” for third place, with “Adrift” projected to be slightly ahead with $11.42 million to “Infinity War’s” $10 million.

From STXfilms and Lakeshore Entertainment, “Adrift” is opening at 3,015 North American theaters and earned an estimated $4.23 million on Friday. The film is based on a true story, with Woodley and Sam Claflin starring as a couple that sets sail across the ocean in 1983. The two get stranded in the middle of the Pacific Ocean during a hurricane and attempt to navigate to Hawaii without communication or tools.

“Adrift” has a current 70% rating on Rotten Tomatoes with a B CinemaScore. Variety‘s Owen Gleiberman praised Woodley’s performance, and wrote that “audiences who seek out this movie will feel, by the end, more pleased than not.”

“Avengers: Infinity War” needs about another $100 million to total $2 billion worldwide, and has earned $635 million domestically. It’s currently sitting at No. 4 on the all-time highest global grossers list, just behind “Star Wars: The Force Awakens” at $2.068 billion.

The third frame of “Book Club,” starring Jane Fonda, Candace Bergen, Diane Keaton and Mary Steenburgen, should round out the slow weekend in fifth with $6 million from 3,169 theaters. The film has so far earned $42.6 million.

Johnny Knoxville’s “Action Point” is likely to bring in just over $2 million at 2,032 venues. The R-rated comedy, set at a New Jersey theme park, features bizarre stunts in the vein of Knoxville’s earlier films.

BH Tilt’s horror sci-fier “Upgrade” should take in as much as $4.2 million from 1,457 locations. “Saw” and “Insidious” helmer Leigh Whannell wrote and directed “Upgrade,” which premiered at this year’s South by Southwest. Logan Marshall-Green plays a man who gets an experimental computer chip implanted in his spinal cord after he’s left paralyzed following a mugging.