Box Office: ‘Ocean’s 8’ Likely to Walk Off With $41 Million Debut 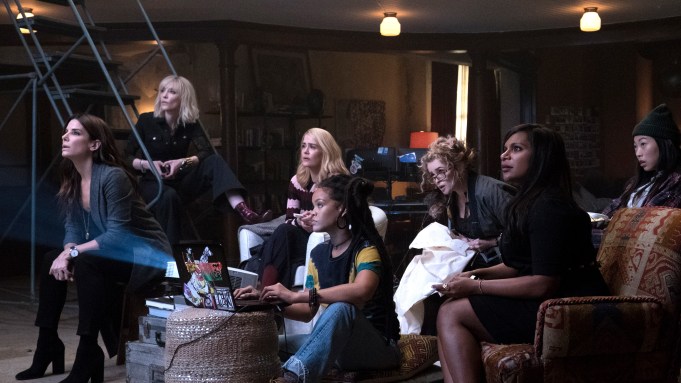 “Ocean’s 8” is on its way to a solid opening weekend of about $41 million from 4,145 North American locations.

Warner Bros.’ women-led heist film, the fourth in the rebooted Ocean’s series, earned $15.8 million Friday, including $4 million from Thursday night previews. Earlier forecasts had placed the film in the $30 million to $44 million range.

Gary Ross directs from a script he wrote with Olivia Milch. Steven Soderbergh, who helmed the three previous “Ocean’s” movies, produces with Susan Elkins. The film carries a $70 million price tag, and is sitting at a 69% rating on Rotten Tomatoes.

Should estimates hold, “Ocean’s 8” will finish with the best opening among the five films in the franchise, starting with the original “Ocean’s 11” in 1960, followed by the remake “Ocean’s Eleven” in 2001, “Ocean’s Twelve” in 2004, and “Ocean’s Thirteen” in 2007 — all with Clooney, Brad Pitt, Matt Damon, Andy Garcia, and Don Cheadle. Each bowed between $36 million and $39 million in their domestic openings. In total, the trilogy collected over $1.2 billion worldwide.

The third frame of “Solo: A Star Wars Story” is leading a battle for second place with $14 million from 4,335 domestic theaters, though “Deadpool 2” and “Hereditary” are hot on its heels. The Disney film has earned about $165 million domestically since its debut, along with $115 million from foreign markets.

“Deadpool 2” is likely to reel in another $12.75 million in its fourth weekend, bringing its domestic total to $281.53 million. Globally, Fox’s box office triumph has earned $619 million.

A24’s creeping horror film “Hereditary,” starring Toni Collette, set a record for the company Friday as its biggest opening day ever with $5.18 million, beating out “The Witch’s” $3.3 million. With the addition of Saturday and Sunday’s take, “Hereditary” should see an opening weekend of about $12 million from 2,964 North American sites, significantly above earlier forecasts. The film has received strong reviews and sits at a 94% certified fresh rating on Rotten Tomatoes.

Alex Wolff, Milly Shapiro, Ann Dowd, and Gabriel Byrne also star in the story of a family that begins to unveil secrets about their ancestry following the death of their grandmother.

Disney-Marvel’s “Avengers: Infinity War” is still chugging away in its seventh weekend and is likely to bring in another $6 million domestically to take the fifth place slot. The superhero tentpole was recently given a one-month release extension in China, which is common among films that continue to bring in tickets past 30 days of release. This weekend’s take will nudge the film slightly closer to the $2 billion worldwide mark, which it’s likely to cross in the coming weeks if its foreign grosses continue to prove solid.

“Hotel Artemis,” from Global Road Entertainment, should take in a lukewarm $3.24 million in its opening weekend from 2,407 domestic locations. The film stars Jodie Foster, Sterling K. Brown, Sofia Boutella, Jeff Goldblum, Jenny Slate, Brian Tyree Henry, Dave Bautista, and Zachary Quinto. Foster plays the proprietor of a secret hospital for criminals in a futuristic Los Angeles. Written and directed by Drew Pearce, the film has a 58% on Rotten Tomatoes and earned a C- CinemaScore.