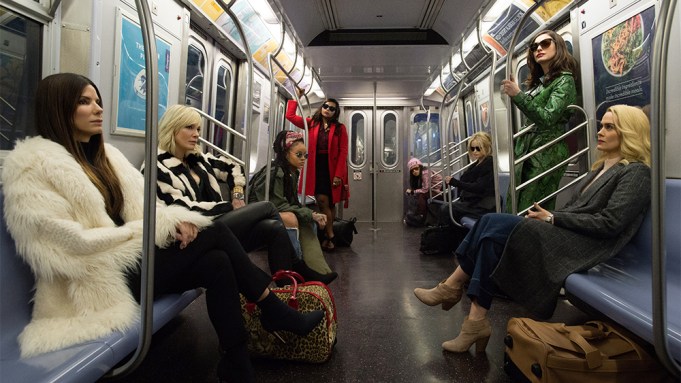 The ladies of “Ocean’s 8” pulled off a solid debut at the North American box office, swiping the crown from a recent string of tentpoles.

The gender-bending heist film opened to $41.5 million from 4,145 locations — a series best for the “Ocean’s” franchise. Overseas, it launched with $12.2 million for a global start of $53.7 million. Warner Bros. and Village Roadshow Pictures co-financed the spin-off, which cost $70 million.

Jeff Goldstein, head of domestic distribution at Warner Bros., says the strong bow is thanks to counter-programming against “Solo: A Star Wars Story” and “Deadpool 2.”

“We exceeded our expectations,” Goldstein said. “There’s always been a lack of movies [female-led projects]. I’m glad audiences enjoyed it as much as we did.”

Women and older moviegoers bolstered numbers. Females accounted for 69% of audiences, while 69% were over the age of 25. “Ocean’s 8” currently has a B+ CinemaScore and 68% rating on Rotten Tomatoes.

“Ocean’s 8” represents a solid return for its star, Sandra Bullock. Her latest on-screen role was in 2015 with “Our Brand Is Crisis,” which bombed with a $3 million opening and grossed only $7 million worldwide. Prior to that, Bullock starred in the critically acclaimed sci-fi thriller “Gravity,” which landed her an Oscar nom. The film opened to $55.7 million and went on to make $274 domestically and $723 million worldwide.

Bullock has long been a box office draw. As of March 2017, the animated global hit “Minions” is her highest grossing film. She voiced the supervillain in the franchise-starter, which earned over $1.1 billion worldwide. “Gravity” is the highest grosser of her live action films, followed by 2009’s “The Blind Side” — which won Bullock the best actress Academy Award — and “The Proposal” in the same year.

Ari Aster’s directorial debut has been critically lauded since its debut in the Midnight section at Sundance Film Festival. Audiences appear to disagree — the horror film currently has a D+ CinemaScore and 64% audience score on Rotten Tomatoes, while its critical rating is 94% Fresh.

Not all weekend openers were as fortunate as “Ocean’s 8” and “Hereditary,” however. “Hotel Artemis” checked in with a dismal $3.1 million on 2,407 screens. Jodie Foster and Sterling K. Brown star in the action thriller set in the near future.

With “Ocean’s 8” easily nabbing the box office crown, “Solo: A Star Wars Story” secured second place with $15.2 million in its third weekend, bringing its domestic total $176.4 million. Internationally, the Han Solo origin story brought in an additional $11.3 million. The Disney and Lucasfilm movie continues to struggle with a global tally of $312.2 million.

In third is “Deadpool 2” with $13.8 million in its fourth frame. Ryan Reynold’s antihero film has pocketed $278.9 million in North America and $376 million internationally, including an $18 million overseas haul this weekend.

Rounding out the top five is the seventh weekend of “Avengers: Infinity War” with $6.9 million. The Marvel adventure picked up another $10.9 million overseas, bringing its global total to $1.998 billion.

In limited release, Focus Features’ “Won’t You Be My Neighbor” launched with $470,000 on 29 screens. The documentary on the life and legacy of “Mister Rogers’ Neighborhood” host Fred Rogers stirred up positive social media buzz, with audiences sharing how the film spurred them to tears. It has a 99% fresh rating on Rotten Tomatoes.

Overall, the year to date box office is ahead 4.3%, according to comScore.