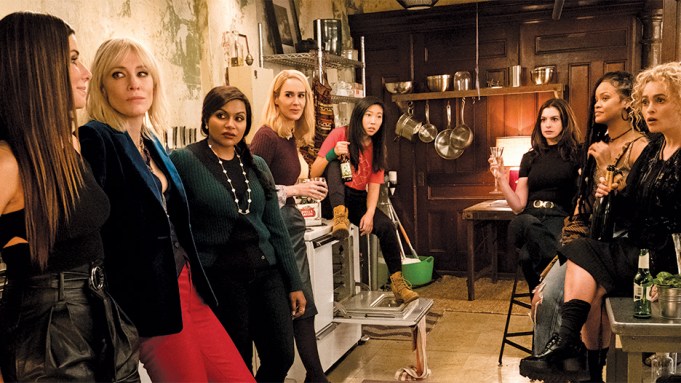 It’s been over a decade since an “Ocean’s” film graced the domestic box office. But the time between heists didn’t hurt the latest reboot. Instead, “Ocean’s 8” delivered the best opening in the franchise’s history.

“Ocean’s 8” had a better-than-expected domestic debut of $41.5 million, along with $12.2 million from 16 international markets for a global launch of $54.7 million. Its longterm playability remains to be seen as it continues its overseas rollout over the next two months, but for a film that cost $70 million, “Ocean’s 8” is off to a winning start.

Just because an original film strikes a chord at the box office doesn’t mean a reboot will have the same luck. Successfully pulling off a franchise revival or reimagining can be a tricky beast to master. On one hand, you’ve got built in audience interest. On the other, you’re toying with beloved stories.

“When you take a franchise that has a big name, that’s a huge responsibility,” comScore box office analyst Paul Dergarabedian said.

Audiences were intrigued by the all-female production since the project was announced over two years ago. Aside from a compelling premise and a stellar cast, “Ocean’s 8” had a number factors on its side. Its box office arrival certainly helped — coming almost a month after “Deadpool 2” and three weeks after “Solo: A Star Wars Story.” There was an appetite for a fresh crowd-pleaser.

But beyond timing, “Ocean’s 8” delivered the goods. In his review for Variety, Owen Gleiberman wrote ” Here’s a gender-flipped sequel that not only works just fine, but renders the whole ‘novelty’ of the concept a borderline irrelevance.” If people are going to show up to your movie, it always helps when it turns out to be watchable.

“If you were to write a blueprint on how to successfully reboot a franchise, ‘Ocean’s 8’ is it,” Dergarabedian said. “It had everything mapped out perfectly.”

So what is that golden window of bringing back a franchise that falls between “Who are these characters?” and “Was anyone asking for this again?”

“The sweet spot is almost unknowable. It’s an inexact science because there are so many variables involved,” Dergarabedian said. “There has to be a fair amount of time, but too long maybe doesn’t exist with the right property.”

It’s not so much the scheduling, box office analysts argue, as it is the quality of the reboot itself that signals a success. It doesn’t necessarily matter if it’s been over a decade between films (“Ocean’s 8”) or barely three years (“Spider-Man: Homecoming”) to warrant a remake.

Nor is nostalgia enough to guarantee box office returns. Recent bombs including Alicia Vikander’s “Tomb Raider” and Tom Cruise’s “The Mummy” have shown that. Audiences and critics alike weren’t able to behind those films — “Tomb Raider” landed a 49% rating on Rotten Tomatoes, while “The Mummy” fared much worse with a dismal 17% rating.

Since the female-fronted “Ocean’s 8” was announced, it drew comparisons to 2016’s “Ghostbusters,” which took the same gender-swapped spin on a beloved franchise. “Ghostbusters” boasted similar star power, arming Melissa McCarthy and Kristen Wiig with proton packs, but it was never able to find its footing at the box office. The project was almost immediately plagued with backlash from moviegoers questioning the need for such a reboot. It also carried an over-sized $144 million budget, making it harder to achieve profitability.

“Most of the ones that have failed, the audience and the critical response was almost universally bad,” Dergarabedian said. “The importance of certain movies and the message gets lost if it’s a complete failure as a movie.

Ask any studio executive or box office analyst, and they’ll share similar sentiments. Timing only means so much if there isn’t a quality product to match.

“It’s all about having a good story,” Jeff Goldstein, domestic distribution head at Warner Bros., the studio behind “Ocean’s 8,” said. “[Ocean’s 8] had a specific female draw. In the zeitgeist, it’s been a little more heightened.”