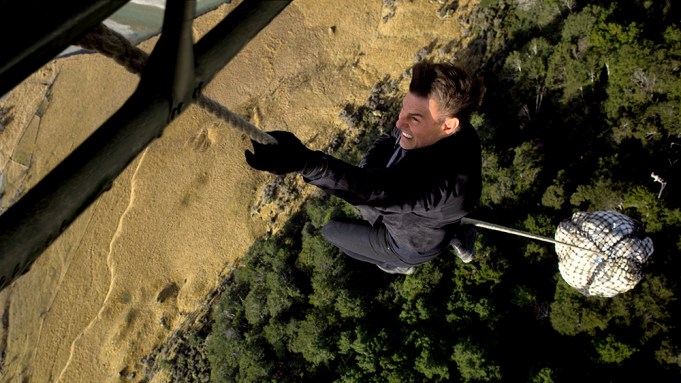 Tom Cruise has pulled off one of his most successful missions yet.

Nevertheless, “Fallout” signals a return to form for Cruise, whose last few box office offerings had less than stellar theatrical runs. “American Made” fared best of recent offerings, while Cruise’s reboot of “The Mummy” and “Jack Reacher: Never Go Back” suffered from high production costs and bleak reviews.

“With an opening like this, we’re going to play well throughout the summer,” Kyle Davies, president of domestic distribution at Paramount, said. “Tom Cruise and Christopher McQuarrie deliver a thrill ride that’s so real, and that’s creating word of mouth.”

Davies attributes Cruise’s tendency to perform his own stunts (one of which caused the actor to break his foot on set!) for increased interested in the action film.

“There was a hunger for something real and exciting,” Davies said. “There’s something very special and raw knowing that the filmmaker and star put it all on the line to create entertainment for moviegoers.”

“The ‘Mission: Impossible’ franchise is a crown jewel for Paramount Pictures,” said box office analyst Paul Dergarabedian. “There is a long track record that shows that they can rely on Cruise and his creative partners to deliver time after time. As long as Cruise can keep delivering the goods, ‘Mission: Impossible’ is an annuity that will keep paying dividends for both Cruise and Paramount for years to come.”

The sixth installment has also received some of the best reviews for the franchise. Its 97% certified fresh rating on Rotten Tomatoes is the highest for both the series, and of any Cruise movie. Audiences seem equally enthusiastic, as “Fallout” holds an A CinemaScore.

“Teen Titans Go!,” with a surprising 91% approval on Rotten Tomatoes, is based on the DC Comics television series created by Michael Jelenic and Aaron Horvath. Much of the TV cast, including Greg Cipes, Scott Menville, Khary Payton, Tara Strong, and Hynden Walch, reprised their roles, while Nicholas Cage, Will Arnett, and Kristen Bell voice new characters.

Among holdovers, Universal’s “Mamma Mia! Here We Go Again” stayed at No. 2 with $15 million, dropping 57% during its second outing for a domestic total of $70 million. Overseas, the jukebox musical picked up $26.6 million, taking its tally to $96.8 million internationally and $167.3 million worldwide.

“The Equalizer 2” was not far behind, picking up $14 million in its sophomore frame. The first sequel of Denzel Washington’s career has earned $64 million.

Another Sony title, “Hotel Transylvania 3,” landed in fourth, picking up $12.4 million in its third frame. In total, the animated adventure has amassed $119 million.

Meanwhile, Disney-Pixar’s “Incredibles 2 is nearing the coveted $1 billion milestone. With $573 million domestically, the superhero sequel is now the highest-grossing animated release of all time and ninth-best North American title. In its seventh outing, “Incredibles 2” earned $7.3 million for a domestic tally of $573 million. It has made $997 million worldwide, including $424 million internationally.

At the specialty box office, Lionsgate’s “Blindspotting” made $1.3 million after expanding to 523 locations for a domestic tally of $1.7 million.

The North American box office is up a healthy 7.8% compared to 2017, according to comScore. Coming off last year’s dismal popcorn season, the summer box office is at an uptick of 10.2%.