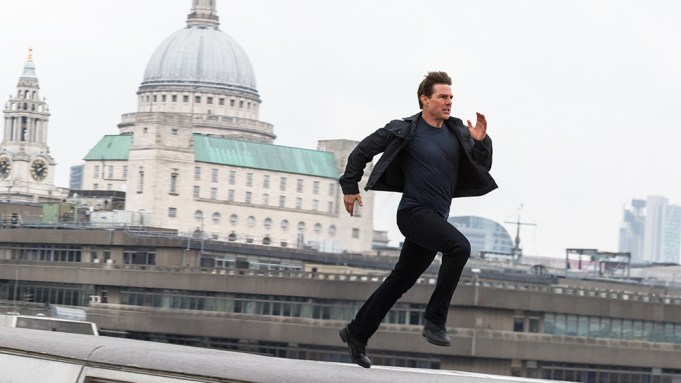 “Mission: Impossible – Fallout” gave Tom Cruise his best opening in 13 years, but in order to make a profit, the pricey action flick from Paramount will need foreign audiences to turn out in force.

With a $178 million production budget and a promotional and distribution price tag that hovers around $150 million, sources close to the studio  and at rival companies estimate that the sixth installment in the spy franchise will need to pull in $560 million in order to get into the black. Some competitors think the figure that “Mission: Impossible” needs to make is even higher, approaching the $650 million range.

These are achievable results given the past track record of films in the series. “Mission: Impossible – Ghost Protocol” boasts the biggest haul with $694.7 million globally. Its follow-up, “Mission: Impossible – Rogue Nation,” fell slightly short of the fourth iteration, generating a nevertheless robust $682.7 million worldwide. If “Fallout” hits either figure, it will be in the clear.

However, there are also a lot of big names that will need to get their share of the spoils. Namely, producer J.J. Abrams and Cruise, both of whom get a sizable percentage of the grosses. Skydance, the film’s financier, will also be cut in on any money the picture makes. All these profit participants will limit Paramount’s taste of the riches. Of the major parties involved in “Mission: Impossible,” only Cruise has gross points, meaning he gets a percentage of the first monies received by the distributor.

Part of the reason that the “Mission: Impossible” films carry a hefty price tag is because they rely on stunts and effects that are filmed “in camera.” It would be cheaper to load up on CGI, but, of course, then audiences would be deprived of seeing Cruise leap across buildings and jump out of a helicopter that’s hovering 2,000 feet above ground. Recounting stories of risking life and limb has become a key selling point for Cruise films.

That does have its drawbacks. One gnarly stunt resulted in the actor fracturing his ankle, causing production to shut down for eight weeks. Insiders say insurance covered that multi-million dollar cost.

“Fallout” does seem off to a promising start. The latest installment launched to a franchise-best $61.5 million in North America and picked up a mighty $92 million overseas. The key to turning a profit will likely be China, where the film opens on Aug. 31. “Rogue Nation,” the previous film in the series, brought in $135 million from the Middle Kingdom. That lofty sum was only dwarfed by the $195 million that “Rogue Nation” took in domestically. If “Fallout” wants to match or surpass “Rogue Nation’s” $682 million global total, it will need to replicate those results in China.

In the wake of “Fallout’s” No. 1 opening and rapturous critical reviews, as well as the earlier success of “A Quiet Place,” some were quick to say that the film was a signal that Paramount had regained its stride after years spent in the box office doldrums. That may be the case. However, “Fallout” still has several key markets left to open before the studio can pop champagne.

It should also be said that “A Quiet Place,” filmed for a measly $17 million, and with a box office haul of $332 million, will likely prove far more profitable than “Fallout.” Plus, no one broke an ankle during shooting.