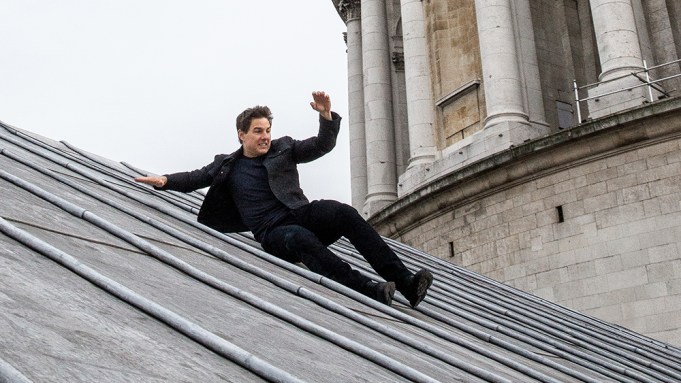 Tom Cruise is officially back in action.

After underwhelming receipts from “American Made,” “The Mummy” reboot, and “Jack Reacher: Never Go Back,” Cruise’s latest blockbuster, “Mission: Impossible – Fallout,” signals a return to form for a movie star who needs to prove he’s still profitable as he nears his seventh decade on the planet.

Perhaps “Mission: Impossible’s” greatest stunt is its ability to bank of the success of its leading man, a feat few franchises are able to pull off in an era of diminishing star power. Once upon a time, A-listers like Harrison Ford, Mel Gibson, Julia Roberts, Johnny Depp, and Will Smith could confidently draw crowds with their name alone. It’s trickier now, and series such as “Star Wars,” the Marvel Cinematic Universe, and “The Fast and the Furious” are forced to rely on an all-encompassing brand to entice moviegoers.

But Cruise and “Mission: Impossible” have become synonymous with one another. It’s hard imagining the series existing without him. There were once rumors that Cruise would be replaced by the younger and less expensive Jeremy Renner, whose shadowy analyst Brandt entered the fray in “Ghost Protocol.” That plan, if it existed, appears to have been abandoned and Renner doesn’t even pop up in “Fallout.” The culprit was a busy “Avengers: Infinity War” shooting schedule, but did audiences even miss him?

They’d sure miss Cruise. Since the first “Mission: Impossible” hit theaters over twenty years ago, he has established himself as one of the few remaining action stars. Cruise may have broken a limb while shooting a stunt for “Fallout,” but the 56-year-old shows little signs of slowing down. In fact, “Fallout” has generated some of the best sentiments of the franchise. Its 98% certified fresh rating on Rotten Tomatoes is the highest for both the series, and of any Cruise movie. Audiences seem equally enthusiastic, as “Fallout” is the first “Mission: Impossible” movie to earn an A CinemaScore. That kind of endorsement is rare for a film with that many sequels.

“Tom Cruise is Ethan Hunt and Ethan Hunt is Tom Cruise,” said Paul Dergarabedian, a box office analyst with comScore. “Perhaps no other actor working today is so profoundly linked to a specific character and franchise. It’s impossible to imagine any other actor in this role.”

Even in a movie with a star-studded cast including Henry Cavill, Angela Bassett and Alec Baldwin, Cruise and his signature death-defying stunts are the big draw. In “Fallout,” director Christopher McQuarrie continues to up the stakes. In one instance, Cruise had to execute a complex HALO jump sequence that involved him jumping out of an airplane over 100 times to get it right. For another scene, Cruise learned to fly a helicopter solo and perform a tricky nose dive, all while operating a camera.

“They have gained almost mythic stature among fans,” Dergarabedian said. “There’s almost nobody who can equal him in terms of doing his own stunts.”

Universal’s “Bourne” films are a cautionary tale of toying with a talent-driven series. The Matt Damon-led spy thriller hit a bump when Renner (there he is again!) toplined the fourth installment, “The Bourne Legacy.” Though that title didn’t completely tank at the box office, the movie was generally panned for the absence of its headliner and posted the lowest numbers in the series.

Cruise has yet to have a $100 million opening (his best is still 2005’s “War of the Worlds” with $65 million), but if “Fallout” is any indication, his status as a star who puts butts in seats shouldn’t be written off just yet. Until Paramount pushes forward with another sequel — and that seems inevitable, given the praise for the latest — audiences will be waiting to see what jaw-dropping antics Cruise will be up to next time.