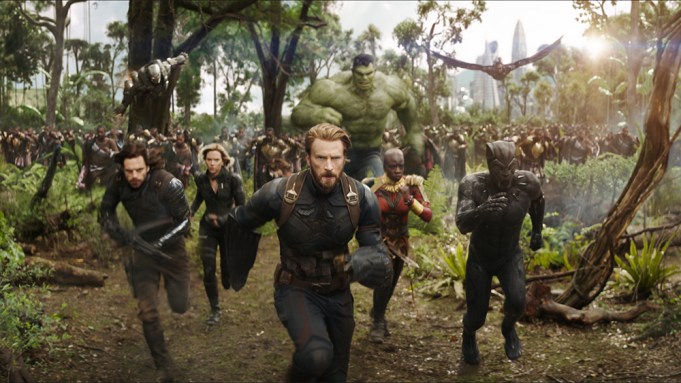 UPDATED: To nobody’s surprise, “Avengers: Infinity War” is already off to a record breaking start.

The Marvel powerhouse looks to open in North America with $250 million from 4,474 locations, which would land it the highest domestic debut of all time. This number could fluctuate when an official tally comes in on Monday.

That would be enough to surpass previous title holder “Star Wars: The Force Awakens,” which bowed with $248 million in 2015 and went on to make over $936.6 million domestically.

“Infinity War” joins the company of “The Force Awakens,” “Star Wars: The Last Jedi,” “Jurassic World,” “The Avengers” and “Black Panther” as one of six films in history to cross the $200 million mark in their debuts.

The latest superhero title scored the highest opening for a Marvel film, surpassing the original “Avengers'” opening of $207.4 million. Its sequel, “Age of Ultron,” launched with $191 million.

“Infinity War” comes on the heels of the Disney-owned Marvel’s most recent success, “Black Panther,” which opened to a massive $202 million in February. Ryan Coogler’s tentpole continues to shatter records, and has earned an impressive $1.3 billion worldwide.