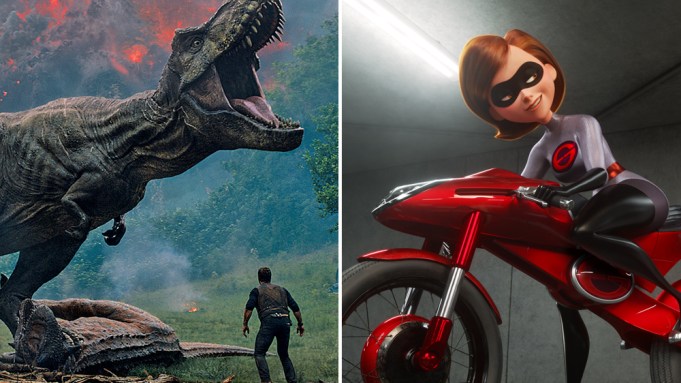 What a difference a few blockbusters make.

It wasn’t all that long ago that cynics were declaring end times for the movie business. While the industry still faces many challenges — from the rise of streaming services to the collapse of the home entertainment market — it appears to have regained its footing at the box office. Thanks to hits such as “Jurassic World: Fallen Kingdom,” “Incredibles 2” and “Deadpool 2,” theatrical revenues this summer were up 12% year over year, and attendance through the first half of 2018 is up more than 3%.

But before Hollywood takes its victory lap, there are some hurdles it still needs to overcome; notably, the lack of a “Star Wars” movie to close out the year. Instead, studios are banking on films such as “Mary Poppins Returns,” “Aquaman” and an animated version of “The Grinch” to make up the difference. “I’d say the movie business is generally in a good place,” said Adam Fogelson, chairman of STX Films, “but with an asterisk.”

Jim Orr, head of distribution for Universal, is among those who are publicly optimistic. “The fall might not look as robust on paper, but the year should end successfully,” he said.

It’s also worth noting that even though the summer of 2017 was one of the worst in decades for the movie industry, the end of the year fielded a number of big hits — and not just “Star Wars: The Last Jedi.” Movie theaters also got a boost from such box office winners as “Jumanji: Welcome to the Jungle,” “Thor: Ragnarok,” “Coco” and “It.”  This go-round, there are no Marvel or Pixar releases or follow-ups to mega-grossing predecessors to pad the numbers. To succeed, the movies must outperform expectations.

They’ll need older audiences weaned on a spoonful of sugar and dancing chimney sweeps to take their kids to see “Mary Poppins Returns,” a sequel to a film that came out when Lyndon Johnson was in the White House. They’re banking on nostalgia for Freddie Mercury, a Reagan-era rock icon, to be so potent that audiences turn up in droves to see “Bohemian Rhapsody,” a biopic that charts the singer’s rise and tragic 1991 death from AIDS. And they’re hoping that Damien Chazelle’s Neil Armstrong drama “First Man,” a story of pre-Space Force heroism starring Ryan Gosling, will stir patriotic impulses in a divided country, filling theaters in red states and blue. A lot will depend on posters, trailers and the quality of the finished films.

“These are the kinds of movies where execution and marketing are key,” said Patrick Corcoran, a spokesman for the National Assn. of Theatre Owners. “If they’re good, they’re going to do really solid business.”

One potential area for improvement is the awards circuit. Last year’s crop of best picture Oscar nominees was the lowest-grossing batch since 2011, with films such as “The Shape of Water” and “Call Me by Your Name” evincing only limited mainstream appeal. Will such 2018 contenders as “Boy Erased,” a gay conversion drama with Lucas Hedges, and “The Front Runner,” a look at an infamous political scandal that stars Hugh Jackman as Gary Hart, prove to be more broadly appealing?

The remake of “A Star Is Born” would seem to be the kind of film that could bridge the cavernous gap that often exists between the critical community and popular taste. Director and star Bradley Cooper has been screening the film for select A-listers. The strategy appears to be working. The picture, which also features Lady Gaga, has been steadily building buzz in the months before its debut at the Venice Film Festival, picking up celebrity endorsements from the likes of Sean Penn and Robert De Niro and creating anticipation for the kind of three-hankie weeper that Hollywood doesn’t make much anymore.

“The only way we’re down this year is if the fall is a total disaster.”
Jeff Bock, Exhibitor Relations

Even if the final four months are sluggish, analysts maintain that the business has built up enough of a head of steam from popcorn season to power it through the rest of the year. There’s some hope that the business could set a new record.

“The only way we’re down this year is if the fall is a total disaster,” said Jeff Bock, an analyst at Exhibitor Relations.

Even as Hollywood banks on familiar franchises and reboots to keep the momentum of summer going, there are major changes roiling the way it has traditionally done business. Streaming services such as Amazon and Netflix have begun kicking the tires on theater chains that are up for sale, looking for screens to play their awards contenders. They boast the kind of clout and financial resources that rival or even dwarf those of major studios. At the same time, the bench of moviemakers is shrinking. In the coming months, one fewer company will be greenlighting movies, as Disney prepares to absorb 20th Century Fox. That means upcoming holiday seasons could see fewer films hitting multiplexes.

And then there’s the ticketing revolution that’s dominating the exhibition landscape. MoviePass may be running on fumes, but the subscription service has ushered in a new way of going to theaters. Even if the company fails — and with its stock underwater and its cash running low, that seems likely — it will have introduced a Netflix- or Spotify-type model into the space. AMC and Cinemark have already responded with their own monthly subscription services, and many observers expect Regal to follow suit. Studios and exhibitors are mixed about the change.

“I think the result [from subscription services] can be positive if it’s done right,” said Jeff Goldstein, head of domestic distribution at Warner Bros. “Wrong, it’s a big miss.”

Though the Avengers and the Skywalker clan decided to take a holiday season off, there are still a cavalcade of big-budget releases clustered along the Thanksgiving and Christmas corridors. “Creed II,” “Ralph Breaks the Internet” and “Robin Hood” all arrive in time for Turkey Day. They won’t just be fighting each other; they’ll also be contending with the second week of “Fantastic Beasts: The Crimes of Grindelwald.” Christmas is even more of a pileup. Currently, five blockbuster hopefuls will all open on Dec. 21. It’s a crowd that includes “Aquaman,” the sci-fi epic “Alita: Battle Angel,” “Transformers” spin-off “Bumblebee,” the Will Ferrell comedy “Holmes and Watson” and Robert Zemeckis’ “Welcome to Marwen.” For good measure, “On the Basis of Sex,” a drama about one of Supreme Court Justice Ruth Bader Ginsburg’s most important cases, debuts on Christmas Day. With that many major releases all encroaching on one another, there’s bound to be some cannibalization.

“It’s inevitable in a crowded marketplace that sometimes the movies can bump into each other,” said Kyle Davies, president of distribution at Paramount Pictures. “The fender benders — that’s part of life in the movie market. You want to avoid the demolition derby.”