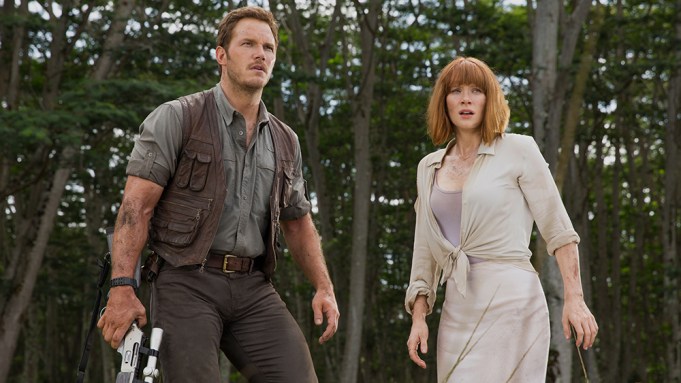 “Jurassic World: Fallen Kingdom” is continuing to top the box office with an estimated $59 million from 4,485 North American locations in its sophomore frame.

The number marks a roughly 60% decline from its opening weekend of $148 million, which marked the 20th-best of all time. The Chris Pratt-led tentpole has reeled in $204.8 million domestically for Universal and about $809 million worldwide. Only 25 films have topped the $60 million domestic mark in their second weekends.

Looking to land the second place slot is Disney-Pixar’s third weekend of “Incredibles 2,” with an estimated $44 million. The animated superhero film has been a box office smash for Disney, earning $407 million domestically and $156.9 million internationally. The film opened to $182 million, outstripping “Finding Dory” to achieve the biggest opening weekend of all time for an animated film.

“Sicario: Day of the Soldado” is aiming for an estimated $18.2 million debut from 3,055 theaters, which would hand it third place. The Sony sequel earned $7.485 million on Friday. Josh Brolin and Benicio del Toro star in a reprisal of their “Sicario” roles as a CIA agent and former undercover operative. Taylor Sheridan wrote both films, with Stefano Sollima directing “Day of the Soldado.” The film is averaging a 64% fresh rating on Rotten Tomatoes.

After draining his life savings to enter a team in the Rucker Classic street ball tournament in Harlem, Dax (Howery) is dealt a series of unfortunate setbacks, including losing his team to his longtime rival (Kroll).  Desperate to win the tournament and the cash prize, Dax stumbles upon Uncle Drew and convinces him to return to the court one more time. The two men embark on a road trip to round up Drew’s old basketball squad (O’Neal, Chris Webber, Reggie Miller, Nate Robinson, and Lisa Leslie) and prove that a group of seniors can still win the big one.

Charles Stone III directed from a script by Jay Longino. The film is sitting at a 67% score on Rotten Tomatoes and earned an A CinemaScore.

“Ocean’s 8’s” fourth frame is likely to add about $8 million to its tally, slotting into fifth place. The film has so far earned $106 million domestically, along with $80.5 million from overseas markets.