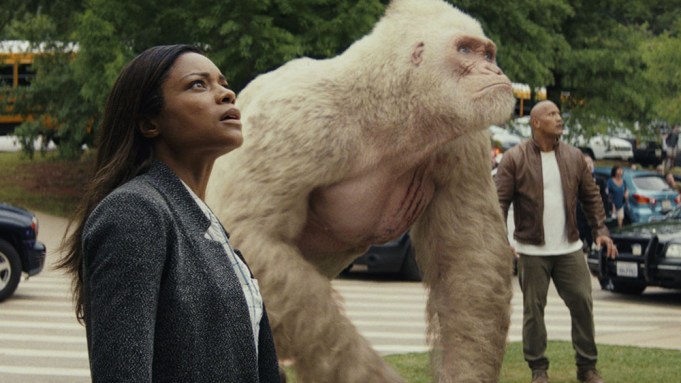 Dwayne Johnson’s “Rampage” has once again secured the top spot at the international box office.

The Warner Bros. film pulled in $57 million from 61 territories in its second weekend, crossing the $200 million mark internationally. With the $21 million it made domestically this weekend, “Rampage’s” global tally sits at $283 million.

Another Warner Bros.’ title, “Ready Player One” earned $23 million from 67 territories this weekend. Steven Spielberg’s latest opened this weekend in its final major market, Japan, with $4.4 million from 749 screens. Internationally, the film is just shy of the $400 million mark at $395.4 million. “Ready Player One’s” worldwide total currently amounts to $521.6 million.

The domestic box office’s top title “A Quiet Place” gathered $15 million from 57 markets in its third weekend, where it opened in two new territories. The thriller bowed in Spain with $891,000 at 287 locations, and in Vietnam with $302,000 at 139 locations. The next major markets to release include China, France, and Japan.

Along with its $21.8 million from North America this weekend, John Krasinski’s horror film has made $206.8 million worldwide.

Universal and Blumhouse’s “Truth or Dare” opened in 18 new territories this weekend. Its strongest debut came from Mexico, which yielded $1.3 million in 958 locations. In the United Arab Emirates, the horror flick made $223,000 from 45 locations, while in Central America it made $223,000 from 147 locations.

“Truth or Dare” scored $4.1 million from 25 territories, with an international total of $7.9 million. Combined with its domestic weekend of $7.9 million, the film has made $38.3 million globally.