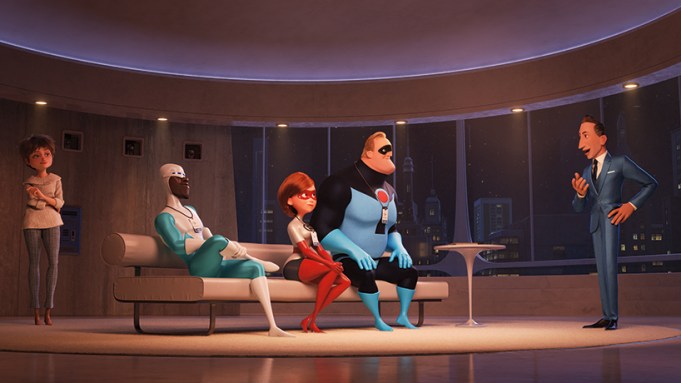 Disney-Pixar’s “Incredibles 2” is flying to an estimated $182 million from 4,410 North American locations in its debut weekend.

Disney’s most recent estimate is more conservative, predicting an opening between $160 million and $170 million. Either way, “Incredibles 2” will become the animated film with the highest ever opening weekend, beating out 2016’s “Finding Dory,” which brought in $135 million.

“Incredibles 2” earned a record-breaking $18.5 million in Thursday previews alone, causing its debut box office predictions to skyrocket from an an earlier range of $125 million to $140 million. It grossed an estimated $71.5 million on Friday, and became the 47th film to earn an A+ CinemaScore. The film is currently rated at 94% certified fresh on Rotten Tomatoes.

Bird also wrote and directed the original “Incredibles,” which opened in 2004 with $70.5 million, the second-largest opening at the time for an animated feature. It went on to win the Oscar for best animated film and earn $633 million worldwide.

The second frame of Warner Bros.’ “Ocean’s 8” should land in second place with about $20 million from 4,145 domestic sites. The fourth film in the “Ocean’s” franchise opened to $41.6 million and has earned $79 million globally. Sandra Bullock stars as Danny Ocean’s sister Debbie, who recruits a group of women, including Cate Blanchett, Mindy Kaling, Rihanna, Awkwafina, Sarah Paulson, Helena Bonham Carter, and Anne Hathaway, to steal millions of dollars worth of jewels from the Met gala.

“Tag,” starring Jon Hamm, Jeremy Renner, Hannibal Buress, Jake Johnson, and Ed Helms, will likely to debut to around $15 million from 3,382 theaters, slotting into third place. The R-rated comedy is based on a Wall Street Journal article about a group of grown men who play a longstanding game of tag. The Warner Bros. pic is sitting at a 57% Rotten Tomatoes rating with a B+ CinemaScore. Jeff Tomsic directed from a script by Rob McKittrick and Mark Steilen.

The fourth frame of “Solo: A Star Wars Story” will battle it out for fourth place with the fifth weekend of “Deadpool 2,” each forecasted to bring in around $9 million. “Solo” has earned only $183 million domestically, while “Deadpool 2” has knocked it out of the park with $285 million and a global $665 million.

Sony’s “Superfly” remake has earned $5.865 million from 2,220 North American locations since its Wednesday premiere, including $1.87 million on Friday. The film remains on track to reel in about $8 million for the weekend.

“Gotti,” which premiered at the Cannes Film Festival, debuts at 503 locations this weekend and was tracking for about $1.7 million from Vertical Entertainment, Sunrider, and MoviePass. John Travolta co-stars with his wife, Kelly Preston, in the mobster pic centering on New York City Gambino crime family leader John Gotti.