Continue to Variety SKIP AD
You will be redirected back to your article in seconds
Jul 14, 2018 8:45am PT 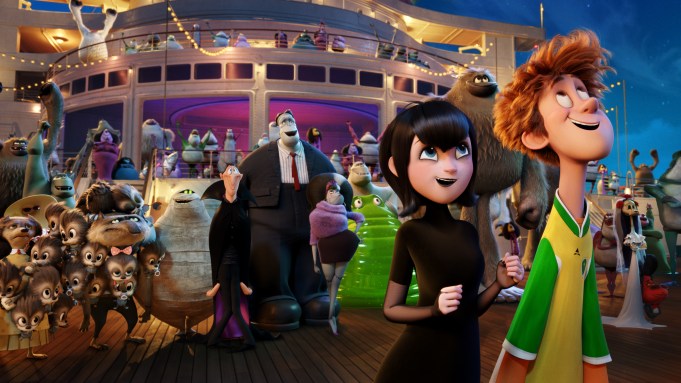 The weekend’s two box office openers are coming in a far cry apart, with “Hotel Transylvania 3” soaring to an estimated $41 million from 4,267 sites while Dwayne Johnson’s “Skyscraper” heads for a stale $25 million from 3,782 domestic locations.

“Hotel Transylvania 3: Summer Vacation’s” estimate places it at the top of the box office, with Disney-Marvel’s latest installment, “Ant-Man and the Wasp,” looking to nab the second place spot in its sophomore weekend with an estimated $28 million from 4,206 theaters. That leaves Universal’s “Skyscraper” in third.

“Incredibles 2” will again battle it out with “Jurassic World: Fallen Kingdom” for the fourth place slot, with each likely to bring in around $15 million.

“Skyscraper,” an action film that sees Johnson’s security consultant battling to save his family at the top of the world’s tallest skyscraper, is coming in far below earlier estimates in the $33 million to $40 million range. It’s possible the lackluster performance is a result of Johnson fatigue, as The Rock starred in two major action films within the last 12 months, “Jumanji: Welcome to the Jungle” and “Rampage,” which made its debut only three months ago. “Jumanji” was a surprise worldwide hit for Sony, earning $961 million globally, while “Rampage” has earned $425 million worldwide.

“Ant-Man and the Wasp,” which opened to a respectable $75.8 million last weekend, will have earned around $140 million by the end of the weekend. “Incredibles 2,” now in its fifth frame, has been a massive success worldwide. It’s earned $792 million globally, $524 million of which comes from domestic revenues. “Jurassic World: Fallen Kingdom,” one weekend behind “Incredibles 2,” has topped $1 billion worldwide, including $727 million from international markets.

Indie hit “Sorry to Bother You,” from Annapurna, added 789 theaters to its range this weekend and is hoping to reel in another $3.8 million to bring its tally to around $7 million. The sci fi comedy stars Lakeith Stanfield and Tessa Thompson, and centers around a telemarketer who’s dissatisfied with his job until he starts using his “white voice” on clients.

Amazon’s Joaquin Phoenix-starrer “Don’t Worry, He Won’t Get Far on Foot” is having its limited opening at four theaters, which should bring in around $75,000. Gus Van Sant’s critically lauded biopic about the life of cartoonist and quadriplegic John Callahan has an 80% fresh rating on Rotten Tomatoes.

“Eighth Grade,” Bo Burnham’s directorial debut that’s also in a limited opening at four theaters, is heading for a stellar $240,000. That film, starring Elsie Fisher as an awkward eighth grader, has an early score of 99% certified fresh on the review aggregator site.