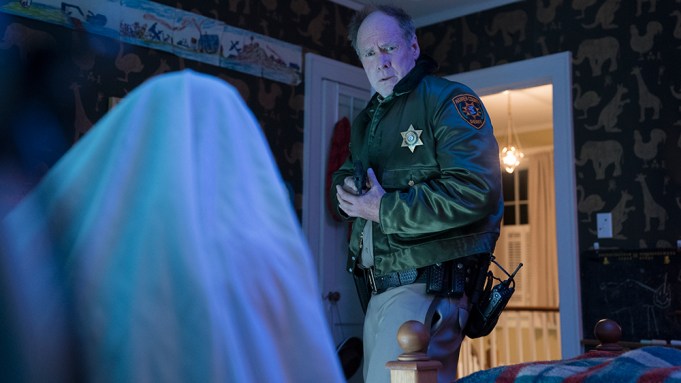 Jamie Lee Curtis’ “Halloween” is looking to slice up an opening weekend of as high as $75 million at 3,928 North American locations, early estimates showed Friday.

Universal’s R-rated slasher film is on its way to posting the second-highest October launch of all time, bested only by the $80 million opening of Tom Hardy’s “Venom” on Oct. 5-7. Anticipation is high among moviegoers for “Halloween,” with Curtis returning as Laurie Strode facing off against serial killer Michael Myers. Thursday night previews showed plenty of power with $7.7 million.

Friday’s mid-day estimates for “Halloween” — some of which were above $75 million — came in over the top end of this week’s expectations. Universal had been cautiously forecasting a $50 million bow, while some analysts had projected a $70 million launch. “Halloween” is also opening in 21 international territories this weekend.

“Halloween” will obliterate the franchise record opening of $26 million set by the 2007 Rob Zombie reboot. It will also post the second-highest start for an R-rated horror film since “It” and its $123 million launch. Given its $10 million production budget, the sequel is on track to be hugely profitable.

The new “Halloween” is the 11th installment in the franchise, five of which have starred Curtis, and a direct sequel to John Carpenter’s original 1978 movie in which Curtis’ teenage babysitter character survived multiple attacks by the deranged Myers. It was the feature film debut for Curtis — daughter of Oscar-nominated actors Tony Curtis and Janet Leigh — and a box office smash with $70 million worldwide on a $300,000 budget.

The new movie finds Myers, portrayed again by Nick Castle, escaping custody and heading for Haddonfield, Il., for a final showdown with Strode on Halloween night. “Halloween” is produced by Trancas International Films, Blumhouse, and Miramax, and has garnered some of the best reviews for a series entry yet with a 79% “fresh” rating on Rotten Tomatoes.

Carpenter returned to executive produce and compose the score for “Halloween.” David Gordon Green directs from a script he co-wrote with Danny McBride and Jeff Fradley.

After winning the past two weekends and banking more than $150 million, “Venom” is battling for second place with Warner Bros.’ “A Star Is Born,” with both coming in around $19 million. Lady Gaga’s “A Star Is Born” has gone past $104 million in its first 13 days.

Universal’s second weekend of space epic “First Man,” starring Ryan Gosling, is in a three-way fight for fourth place with Sony’s sophomore session of “Goosebumps 2: Haunted Halloween” and Fox’s expanded run of drama “The Hate U Give” to 2,303 locations. Friday’s estimates showed “The Hate U Give,” starring Amandla Stenberg, and “Goosebumps 2” in the $9 million to $10 million range, followed by “First Man” at about $8.5 million.

The overall weekend should easily outpace the same 2017 frame, which generated a mild $97.9 million, according to comScore. Year-to-date domestic box office reached $9.36 billion on Oct. 17 for an impressive 9.6% increase over last year.