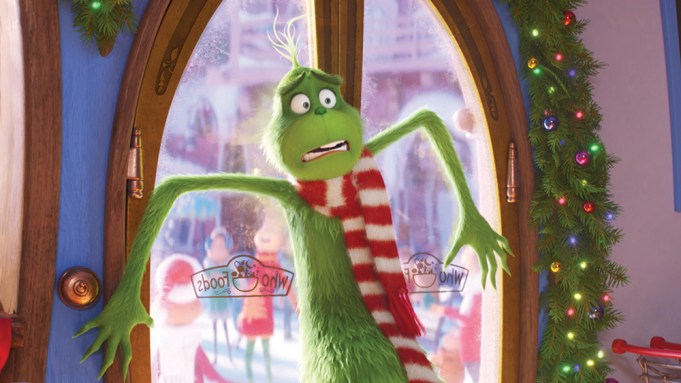 “The Grinch” proved it’s never too early for some holiday cheer as the animated family flick stole the weekend box office with $66 million from 4,141 locations.

Illumination and Universal’s adaptation of the Dr. Seuss holiday tale now ranks as the best start for a Christmas film. Fellow new offerings “Overlord” and “The Girl In the Spider’s Web” weren’t as gleeful, with mediocre debuts of $10 million and $8 million, respectively.

Benedict Cumberbatch voiced the animated green grouch in “The Grinch,” which cost the studio $75 million to make. While it trails the start of Illumination’s latest Dr. Seuss story “The Lorax” ($70 million), “The Grinch” should benefit from the lengthy holiday corridor. Overseas, it generated $12.7 million in 23 territories for a global start of $78.7 million.

Though critics gave “Grinch” a so-so 55% rating on Rotten Tomatoes — with many noting the second big-screen adaptation didn’t add much to the original 1966 TV special — audiences, for the most part, embraced the movie and gave it an A- CinemaScore. Opening weekend crowds were 53% female and 29% under the age of 12.

Universal’s president of domestic distribution Jim Orr gave a nod to the film’s witty and snarky advertising campaign that played on the Grinch’s cynical humor for buoying this weekend’s numbers.
“Our marketing was eye-catching and unique,” Orr said. “It took full advantage of the character. It was purposeful because we knew we had a big property.”

Newcomers “The Girl in the Spider’s Web” and “Overlord” weren’t able to best “Bohemian Rhapsody.” Fox’s Queen biopic showed staying power with a solid $30.9 million in its sophomore frame, representing a drop of just 41%. That brings its 10-day domestic total just shy of $100 million.

It hasn’t been all Yuletide joy at the box office. In fourth, Disney’s “The Nutcracker and the Four Realms” slipped over 50% in its second weekend with $9.6 million to bring its domestic total to a disappointing $35 million. The studio is banking on its overseas run to justify the family film’s pricey $125 million budget. Globally, “Nutcracker” has made $96.7 million, including $61.4 million from international.

Meanwhile, “The Girl in the Spider’s Web” might not even crack the top five with a bleak $8 million. Sunday estimates show Warner Bros.’ “A Star Is Born,” now in its sixth weekend, also generated $8 million this weekend. The final order won’t be determined until official numbers come in on Monday morning.

While “Spider’s Web’s” debut was in line with the studio’s projection and not far behind the start of “The Girl With the Dragon Tattoo’s” ($12.7 million), the second film in the Millennium series doesn’t look like it will have the same legs as David Fincher’s original film. Fede Alvarez directed “Spider’s Web,” which was budgeted at $43 million. Co-produced by Columbia, MGM, and New Regency, it cost significantly less to make than “Dragon Tattoo,” however that film played strong throughout the holiday season and went on to earn a huge $102 million stateside and $230 million worldwide.

“Spider’s Web” isn’t faring well oversees either. The R-rated thriller pocketed $6.2 million from 49 markets this weekend, for a global tally of $16.3 million.

Among arthouse releases, Sony’s “The Front Runner” with Hugh Jackman launched in four locations on Tuesday to coincide with the midterm elections and picked up just $76,000 through Sunday.

With another strong showing at multiplexes, the domestic box office remains up over 10% compared to last year, according to Comscore. That momentum should continue in the run-up to Turkey Day, one of the busiest times for moviegoing. A number of buzzy titles including “Fantastic Beasts: The Crimes of Grindelwald,” “Creed 2” and “Ralph Breaks the Internet” enter theaters in upcoming weeks.

“The prospects for a record breaking year are virtually assured as we head toward the debut of ‘Fantastic Beasts 2’ and a huge Thanksgiving week at the multiplex,” said Paul Dergarabedian, a senior media analyst at Comscore.