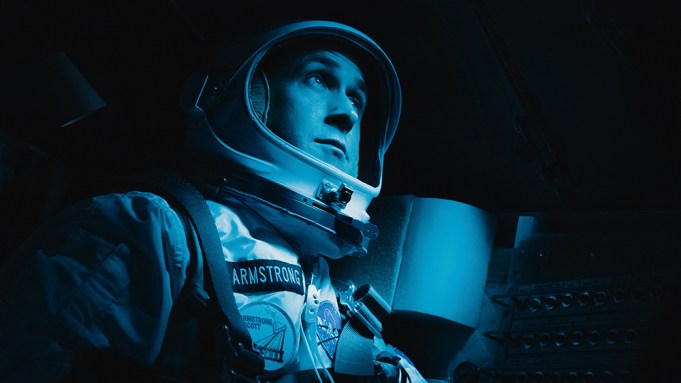 Preview showings began at 7 p.m. About a third of the “First Man” total came from $370,000 at 404 Imax screens — the biggest percentage of Thursday previews for a wide studio release that Imax has ever generated.

“First Man,” starring Gosling as astronaut Neil Armstrong, has been forecast to open with $18 million to $20 million at 3,640 sites this weekend. It’s heading for a third-place finish behind Tom Hardy’s “Venom” and Lady Gaga’s “A Star Is Born.”

The Universal movie, directed by Damien Chazelle, follows Armstrong’s life and the years leading up to the Apollo 11 mission to the moon in 1969. Critics have embraced “First Man,” which premiered at the Venice Film Festival and carries a 90% “fresh” rating on Rotten Tomatoes.

Sony’s horror comedy “Goosebumps 2: Haunted Halloween” is also debuting this weekend at 3,521 venues, with expectations for a fourth-place finish in the $15 million range as it aims at family audiences. Fox’s mystery “Bad Times at the El Royale” is eyeing a wide range between $8 million and $12 million from 2,808 screens.

“Venom” has grossed $102.8 in its first six days, while “A Star Is Born” has pulled in $61.6 million. Both titles opened well above expectations, leading to a record for top October weekend, and both should wind up in the $30 million range this weekend.

Overall domestic moviegoing for 2018 has hit $9.17 billion as of Oct. 10, for a 9.1% increase over last year, according to comScore. Paul Dergarabedian, senior media analyst with the tracking service, said the month of October is up 42.5% over last year.

“A diverse lineup of very notable newcomers, including ‘First Man,’ ‘Bad Times at the El Royale,’ and ‘Goosebumps 2,’ will join the hit parade kicked off by ‘Venom’ and ‘A Star Is Born’ last week, and the good news doesn’t end there as success is assured well beyond this weekend with the scarily huge opening of ‘Halloween’ and the wide release of ‘The Hate U Give’ on the horizon,” he added.