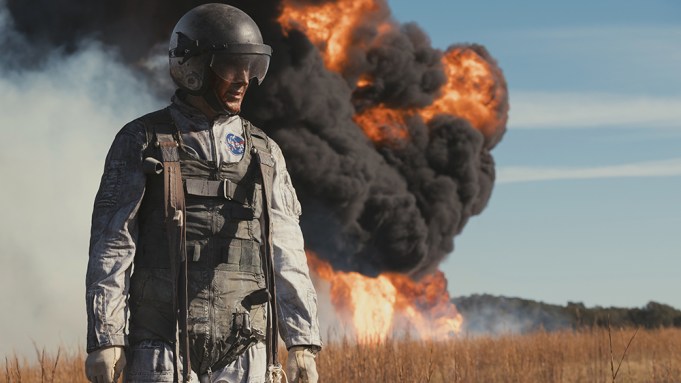 Sony’s “Venom” and Warner Bros.’ “A Star Is Born” are set to top the box office in the pair’s second weekend, while a slew of new releases hit multiplexes, led by Universal’s “First Man.”

“Venom” is on its way to adding an estimated $32 million to its total for the top spot, bringing its domestic tally to $139.25 million. The twist on a superhero tale has earned another $127 million internationally in its first seven days.

Lady Gaga and Bradley Cooper’s “A Star Is Born” is heading for a $28 million sophomore frame. The drama, which is also Cooper’s directorial debut, has amassed $66 million domestically in its first week, with another $14 million from overseas markets.

The opening of Universal’s “First Man,” which stars Ryan Gosling and Claire Foy, is coming in slightly below early forecasts, which had placed it in the $17 million to $20 million range, with $16 million from 3,640 domestic sites. The pic was directed by “La La Land” helmer Damien Chazelle from Josh Singer’s script. “First Man” is a personal take on the story of Neil Armstrong’s moon landing, and has an 88% certified fresh rating on Rotten Tomatoes, along with a B+ CinemaScore.

If estimates hold, the film will be Gosling’s fifth-best opening, just behind 2013’s “Gangster Squad,” which opened to $17.07 million. Should “First Man” come in above that number, it’ll be topped by 2011 romcom — and Gosling’s first turn opposite “La La Land” co-star Emma Stone — “Crazy, Stupid, Love,” which debuted to $19.1 million.

A kid-friendly Halloween-timed debut, “Goosebumps 2: Haunted Halloween,” will spar with “First Man” for third place, aiming for $15.75 million from 3,521 cinemas. The Sony-Columbia sequel earned $4.85 million on Friday. The original “Goosebumps,” released in 2015, debuted to $23 million and went on to total $150 million worldwide.

Ari Sandel directed the film from a script by Rob Lieber. Both it and the previous film are based on stories from R. L. Stine’s children’s horror anthology series. It has a 43% rating on Rotten Tomatoes and a B CinemaScore.

“Smallfoot” is looking to land at no. 5 in its third frame with about $9 million. The star-studded animated feature from Warner Bros. has garnered $48 million domestically since its Sept. 28 release and an additional $33 million from the foreign box office.

“Bad Times at the El Royale” is eyeing a $7.8 million debut from 2,808 North American locations, landing at no. 7. Fox’s neo-noir thriller starring Chris Hemsworth, Jon Hamm, Jeff Bridges, Cynthia Erivo and Dakota Johnson is coming in on the lower end of early projections, which had predicted a debut of up to $12 million. Drew Goddard (“Cabin in the Woods”) directed the pic from his own script. “Bad Times” has earned a 71% certified fresh rating on Rotten Tomatoes and a B- CinemaScore.

Steve Carell and Timothee Chalamet’s Oscar-bait drama “Beautiful Boy” is launching in a limited release at four theaters. Amazon is estimating roughly $50,000-$60,000 per screen. “Beautiful Boy” follows the true story of a father and son whose relationship is tested by the son’s meth addiction.

“Beautiful Boy” is Belgian filmmaker Felix Van Groeningen’s English language debut. He wrote the script with Luke Davies from David and Nic Sheff’s pair of memoirs. The film has an early RT rating of 63%.

Excel’s “Jane and Emma,” which tells the story of a young girl who travels to meet Mormonism founder Joseph Smith and forms a bond with his wife, is opening at 21 theaters to an estimated $160,000. Chantelle Squires directed the film from Melissa Leilani Larson’s script.

Opening at no. 12 is GVN Releasing’s “Gosnell: The Trial of America’s Biggest Serial Killer,” which is looking to earn $1.2 million from 668 theaters. The conservative-backed, pro-life film dramatizes the story of Kermit Gosnell, a real-life doctor who performed some abortions past the legal gestational age in Pennsylvania, and who is now serving three life sentences for killing three infants born alive during abortion procedures. The controversial film, which was crowdfunded over four years, has been criticized for portraying Gosnell’s actions as typical of abortion doctors, and it faced a lawsuit early in its production from a judge who objected to his portrayal in the film.