‘Fantastic Beasts 2’ to Cast a Spell With $63 Million Launch 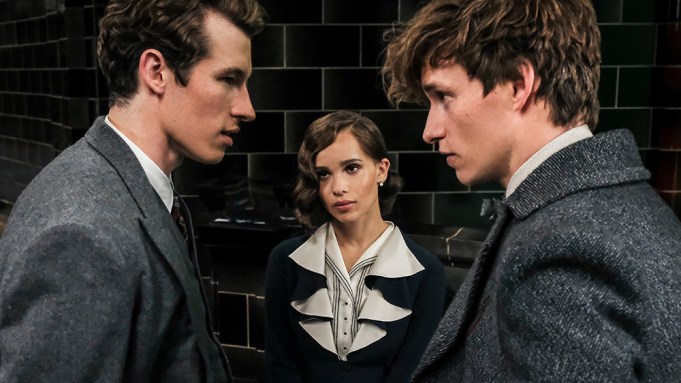 “Fantastic Beasts: The Crimes of Grindelwald” is on its way to a $63 million debut from 4,163 North American theaters.

The latest Wizarding World installment from Warner Bros. earned an estimated $25.7 million on Friday from North America with an additional $74.3 million internationally. If estimates hold, the sequel’s debut would come in behind its predecessor, “Fantastic Beasts and Where to Find Them,” which opened to $74 million domestically in 2016.

Reviews have been mixed, with the film sitting at an unfortunate 39% on Rotten Tomatoes and a B+ CinemaScore. That evidently hasn’t deterred moviegoers, however, and recent research found that the controversy surrounding Depp’s casting as Gellert Grindelwald despite his background of alleged domestic violence won’t put off Harry Potter fans either.

Holdover “Dr. Seuss’ The Grinch” should take in another $39 million in its second weekend for a roughly 42% decline. The latest Seuss adaptation from Illumination and Universal has amassed $97 million domestically and $13 million from foreign markets.

Fox’s “Bohemian Rhapsody” is still seeing strong returns and is likely to land in third with $15.7 million in its third frame. The blockbuster has so far earned $116 million in North America and $200 million overseas.

A pair of openers, “Instant Family,” starring Mark Wahlberg and Rose Byrne, and Fox’s “Widows,” will battle for the fourth place spot, each estimated to bring in about $12 million this weekend.

Paramount is opening “Instant Family” at 3,286 locations, and the comedy earned $4.5 million Friday. Sean Anders directed from a script he co-wrote with John Morris. Margo Martindale, Octavia Spencer, and Tig Notaro also star. The film follows Wahlberg and Byrne’s Pete and Ellie as they decide spur-of-the-moment to foster three children. It has an A CinemaScore and 79% on Rotten Tomatoes.

Davis, Rodriguez, Debicki and Erivo play four women who decide to pull off their late husbands’ last heist in order to pay off the crime boss they owed money. The film has a 91% certified fresh rating on Rotten Tomatoes and a B CinemaScore.

Vincent van Gogh biopic “At Eternity’s Gate” is in limited release at four theaters this weekend and is estimated to reel in about $92,000 for a per-screen average of $23,000. Willem Dafoe stars as the famed artist in the film, which took in $29,250 on Friday. Julian Schnabel directed from a script by Jean-Claude Carrière and Louise Kugelberg. “At Eternity’s Gate” premiered at the 2018 Venice Film Festival, where it was a hit, and Dafoe was presented with the Coppa Volpi for best actor. It has a 76% rating on Rotten Tomatoes.