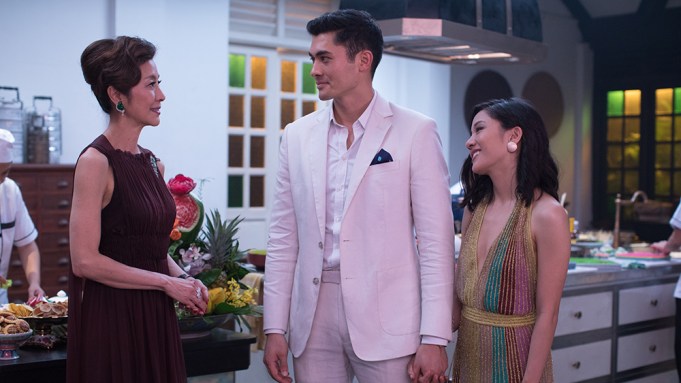 The Constance Wu-starrer is likely to threepeat as the box office topper over the Labor Day weekend, with $30 million for the four-day period. It’s projected to bring in $23 million Friday through Sunday.

The Warner Bros. rom-com will join “Jumanji: Welcome to the Jungle,” “Black Panther,” and “Avengers: Infinity War” as the fourth film of 2018 to top the box office three weekends in a row. It’s earned $101 million worldwide in its first 17 days.

Jason Statham’s “The Meg” is still swimming laps around the competition with a projected $12 million for the holiday weekend. The shark thriller from Warner Bros. has so far earned $112 million domestically and an additional $306 million from overseas markets.

Landing in the third place slot should be “Mission: Impossible – Fallout,” adding another $8 million to its tally. Tom Cruise’s latest has amassed $198 million from North America, plus $355 million internationally.

MGM opened “Operation Finale” on Wednesday at 1,818 domestic sites, and the crime drama starring Ben Kingsley and Oscar Isaac should battle it out with the fifth frame of Disney’s “Christopher Robin” for fourth place. Each is looking to bring in around $7 million through Labor Day.

“Operation Finale,” which was directed by Chris Weitz, earned around $1.7 million on Friday after debuting to $1 million. It tells the story of Israeli Mossad agents who captured SS officer Adolf Eichmann (Kingsley), one of the chief architects of the Holocaust, in 1960 in Argentina. Reviews have been mixed to positive with a 62% rating on Rotten Tomatoes.

Screen Gems’ “Searching” expanded to 1,207 theaters this weekend, which should place the John Cho film at No. 6 with between $6 million and $7 million for the four-day weekend. The film added $1.96 million to its total on Friday, having earned $2.6 million worldwide since its limited release.

Lionsgate debuted Pantelion Films’ “Ya Veremos” at 369 locations for a weekend estimate of $2.25 million. The Spanish language comedy earned $525,000 on Friday. “Ya Veremos” follows Santi (Emiliano Aramayo), a preteen dealing with the recent separation of his parents Rodrigo (Mauricio Ochmann) and Alejandra (Fernanda Castillo). When the trio learns that Santi has a medical condition that could jeopardize his eyesight, they embark on a trip to see as many things as possible before Santi loses his sight completely. Pitipol Ybarra directed the film.

Lionsgate also opened “Kin” at 2,141 North American locations. The action-sci-fi thriller starring Jack Reynor is looking to bring in an estimated $4 million. Zoë Kravitz, Carrie Coon, Dennis Quaid, James Franco, and newcomer Myles Truitt also star. Directed by Jonathan and Josh Baker from a screenplay by Daniel Casey, “Kin” is based on the short film ‘Bag Man’ by the Bakers. The film has an early Rotten Tomatoes rating of 36%.

Focus Features’ “The Little Stranger,” starring Domhnall Gleeson, Ruth Wilson, Will Poulter, and Charlotte Rampling, is opening in a limited release at 474 domestic sites. The gothic horror film is expected to earn around $400,000 through Monday.

Based on Sarah Waters’ novel of the same name, “The Little Stranger” follows Gleeson’s Dr. Faraday, who returns to the home his mother used to work at to tend to a member of the Ayres family. Once there, he realizes the house, and the Ayres, may be holding a dark secret. Lenny Abrahamson directed the film, which is currently sitting at a 61% Rotten Tomatoes score, from a screenplay by Lucinda Coxon.